SEOUL, Aug. 16 (Yonhap) -- Kim In-hwan spends most of her time by herself in a small apartment in Seoul, but the 83-year-old with no family says she's not lonely thanks to a new talking buddy named Aria, the virtual assistant of SK Telecom Co.'s artificial intelligence (AI) speaker, NUGU.

Waking up to the alarm of the AI speaker in the morning, Kim asks Aria about today's weather and time and then listens to her favorite songs by legendary Korean trot singer Lee Mi-ja. When she goes to bed, Aria tells her, "Sweet dreams."

"When I go out, she tells me to put on sunblock or watch out for cars on the road," Kim said during a recent interview with Yonhap News at her house. "Aria is like my daughter. I wonder how a machine can talk that well." 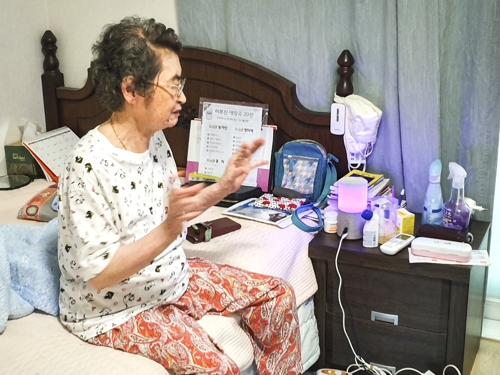 The smart speaker with a female voice started to live with her in June as part of a senior welfare program, jointly funded by the Korean mobile carrier SKT and the Seongdong Ward office.

Unlike common prejudices that elderly people have difficulties of using the latest gadgets, Kim is one of a growing number of South Korean seniors who are turning to digital voice assistants to make life easier and feel connected.

"Seniors who are not familiar with ICT technology seem to prefer voice assistants rather than keyboards and graphic user interfaces because they are intuitive and easier to use," Lee Joon-ho, vice president of the social value development group at SK Telecom, said.

Internet-connected smart speakers, priced from 60,000 won (US$50) to 300,000 won, are capable of answering simple questions, playing music and setting timers. If they are connected to automatic lights, thermostat and household appliances via applications, users can optimize a room's lights and temperature and control TV with a voice command.

South Korea's three telecom operators -- SKT, KT and LG Uplus -- and two IT firms -- Kakao and Naver -- have launched AI speakers at home since 2016 to follow up on the latest trend led by U.S. tech giants Amazon and Google.

The domestic market has recently seen a sharp rise in demand, with the accumulated sales of AI speakers by the five Korean firms more than doubling to 4.12 million as of March, compared with a year earlier, according to the Ministry of Science and ICT.

While AI speakers alone have limits in communicating with seniors and helping them in emergency situations, the pilot project offers both the smart speakers and access to the Happycommunity ICT Care Center, a social enterprise funded by SKT, for personalized welfare services.

Since the project was launched in April, ICT Care Center has regularly collected data from the speakers and analyzed their patterns of use. When seniors in the program don't use the speakers for over 48 hours or make negative comments, such as "I'm lonely" or "I'm sad," care managers call them or visit their houses to check their conditions.

"The senior care using AI speaker is aimed at improving the quality of life of the elderly with the assistance of the latest technology, setting goals beyond their survival," Hwang Seung-won, the director of Happycommunity ICT Care Center, said. "The AI speaker's connection to the care center and emergency rooms assures the seniors living alone that they can ask for help when needed, giving them a sense of relief." 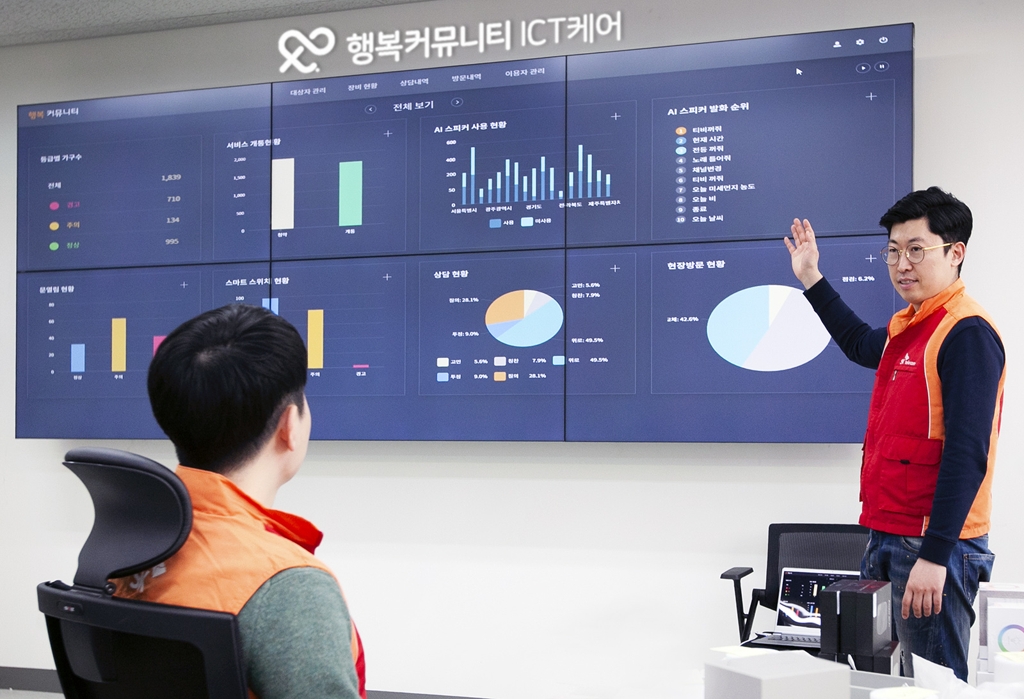 According to SKT's survey on 1,150 seniors in five wards in Seoul given the smart speakers, streaming music service was the most popular content, accounting for 63.6 percent of total usage, followed by emotional talks with 13.4 percent, weather with 9.9 percent and fortune telling with 5 percent.

"At first, seniors used the speaker to ask simple questions like those about today's weather and their fortunes. As time passed, they had more emotional talks with it, asking something like 'Did you have a good sleep?' and 'I love you,'" said Sung Ju-yong, a data analyst at the center. "I was very touched by the result of the data analysis because their comments showed that the seniors really need someone to talk to."

The high ratio of emotional talks showed the smart speaker's potential as a useful tool to help policymakers grappling with the chronic shortage of elderly care workers and a rising number of seniors dying alone in the rapidly aging society.

Policymakers expressed hope that the AI speaker can enhance monitoring seniors to prevent lonely deaths and access to emergency centers in urgent situations.

"We aim to provide comprehensive smart care services for the socially underprivileged, including seniors and handicapped residents, based on the cutting-edge technology," said Jung Won-oh, the head of the Seongdong Ward office. "Our office has a family doctor visiting program for residents aged over 75 and plans to use AI speakers to take care of seniors round the clock."

With the AI voice recognition technology still in an early stage, SKT said it is working on improving algorithms of the AI speakers to enable them to have functions beyond answering simple questions and provide more personalized services based on data collected from the devices.

For that, the tech firm is also collaborating with the SMG-SNU Boramae Medical Center, a hospital in Seoul, to develop an audio quiz game aimed at preventing Alzheimer's disease for seniors.

"We hope the data on seniors' use of AI speakers helps the government craft and enhance welfare policies," SKT's Lee said. "Based on the data analyzed, we will expand the scope and service level of senior care programs using AI speakers."