The government-led national ceremony was held at the Kim Koo Museum and Library in central Seoul, with about 300 people from all walks of life, including elderly women sexually enslaved by the imperial Japanese army.

It is the second time that the government has hosted the event commemorating International Memorial Day for Comfort Women since it designated it as a national memorial day last year. It falls on Aug. 14, the date the late Kim Hak-sun, a former comfort woman, first publicly testified about Japan operating an organized military brothel program during World War II in 1991. It also is the eve of Liberation Day, which marks the end of the 1910-1945 Japanese colonial era. 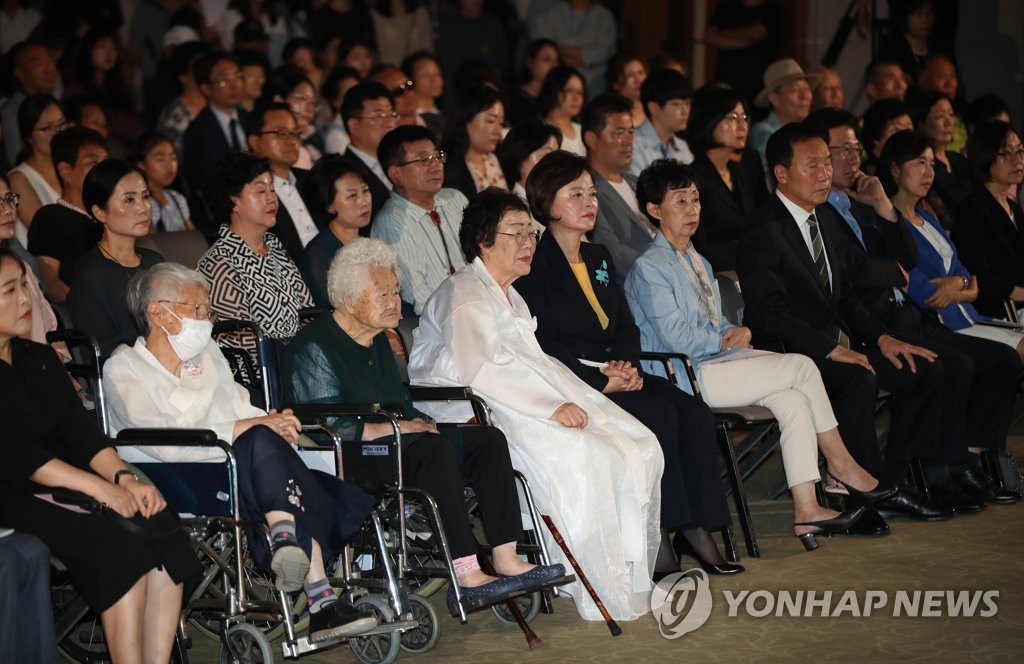 Historians say up to 200,000 women, mostly Koreans, were coerced into sexual servitude in front-line Japanese brothels during World War II when the Korean Peninsula was a Japanese colony. Those sex slaves were euphemistically called comfort women.

This year's event is getting more attention than ever as Seoul-Tokyo conflict has been intensifying after the latter imposed export restrictions on the former and removed the neighboring country from its whitelist of trusted trade partners.

During the ceremony, actress Han Ji-min read a letter written by a daughter of one of the sex slavery victims.

"When I heard my mother was a comfort woman for the Japanese military, I was too young to understand it," she read. "I cried and cried over my mother's pain and suffering that she had to undergo throughout her entire life."

Jin Sun-mee, minister of gender equality and family, said the government will take the lead in expanding the comfort women issue to a women's rights movement.

Former U.S. Rep. Mike Honda, who led the passage of the comfort women resolution at the House of Representatives in 2007, Acan Sylvia Obal of Uganda, an advocate for women's movements, and other prominent figures from the international community delivered video messages during the ceremony.

Acan was awarded the first Kim Bok-dong Peace Prize, named after a human rights activist and survivor of sex slavery during World War II and given to women who contribute to raising awareness of wartime sexual violence.

Meanwhile, symposiums, mass rallies and exhibitions to mark the occasion were held across the country.

The life-size sculpture of three girls was set up near the former site of a Japanese imperial shrine on Mount Nam in the center of the capital. It was made by a nonprofit association of Korean residents in San Francisco and donated to the city of Seoul. 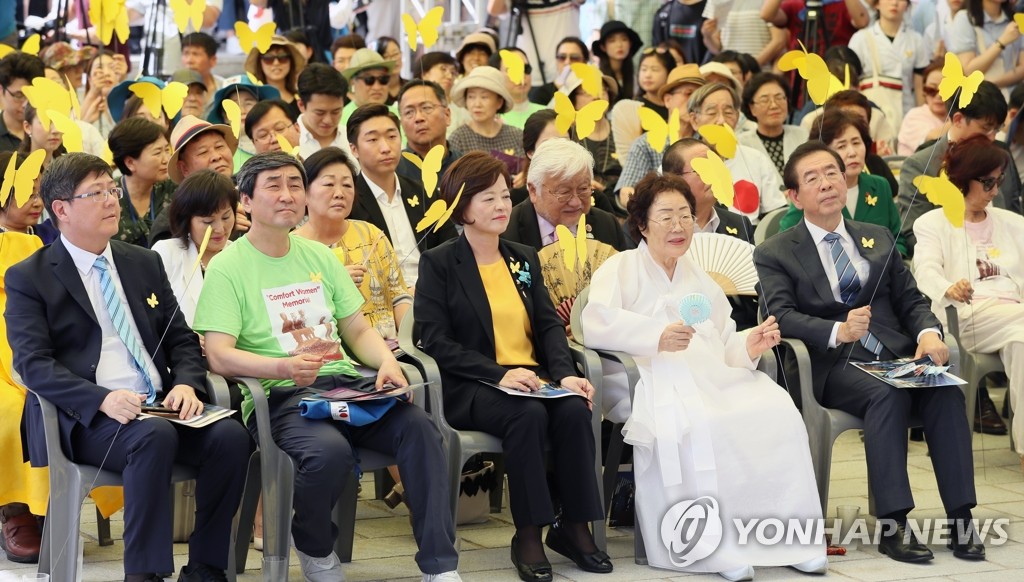 The provincial government of South Gyeongsang Province and municipal governments of Gwangmyeong, southwest of Seoul, and Gangneung on the east coast also commemorated the memorial day for comfort women.

In the southwestern city of Gwangju, some 100 people held a ceremony to remember the issue in front of the statue "A Girl of Peace," which symbolizes the victims of the sex slavery. They offered flowers to the figurine and paid silent tribute.

A memorial hall in Daegu is running an exhibition to honor the victims under the theme of "Remember and Act."

An exhibition, whose Korean title is translated as "Sympathy for a Girl of Peace: We Were Family," is underway at the city hall of the Busan Metropolitan Government from Monday. Some 22 artworks by selected local artists are on display under the theme of sharing the victims' suffering and wishing for their healing.

People outside of Korea also joined the movement.

In a symposium held in Tokyo, Japan, Yang Jing-ja, a Korean-Japanese activist, introduced the history of the weekly protest rally that has been held 1,400 times in Seoul. The so-called Wednesday rally started in 1992 in front of the former compound of the Japanese Embassy to Seoul to demand Tokyo offer a formal apology to former sex slaves.

She also criticized the Tokyo government's decision to hinder a local event organizer from exhibiting a statue of "A Girl of Peace" earlier this month.

The Aichi Triennale 2019, which started its 75-day run at the Aichi Arts Center on Aug. 1, shut down one of its exhibition sections featuring the statue.

In Australia, a group of Korean and local campaigners held a rally in front of the Japanese Consulate General in Sydney and demanded the Japanese government offer a sincere apology over its wartime crimes. 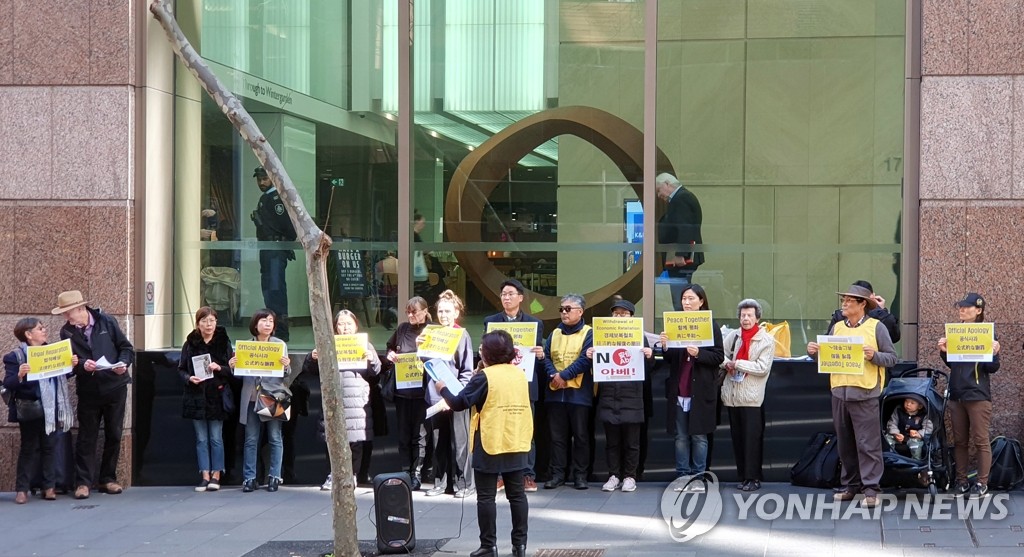