SEOUL, Aug. 14 (Yonhap) -- Seoul stocks closed higher Wednesday on eased trade tension between the United States and China, although they pared part of earlier gains. The Korean won surged against the U.S. dollar amid risk-on sentiment.

The KOSPI rose to as high as 1952.22 points at one point on news that the U.S. decided to delay tariffs on some Chinese imports, but investors went on to lock in recent gains as China's July industrial output missed market expectations.

"As China has agreed to restart trade talks with the U.S. within two weeks, the U.S. decided to delay imposing tariffs on some Chinese goods," said Seo Sang-young, an analyst at Kiwoom Securities. "However, the KOSPI couldn't get a further push as China delivered weaker-than-expected industrial output data." 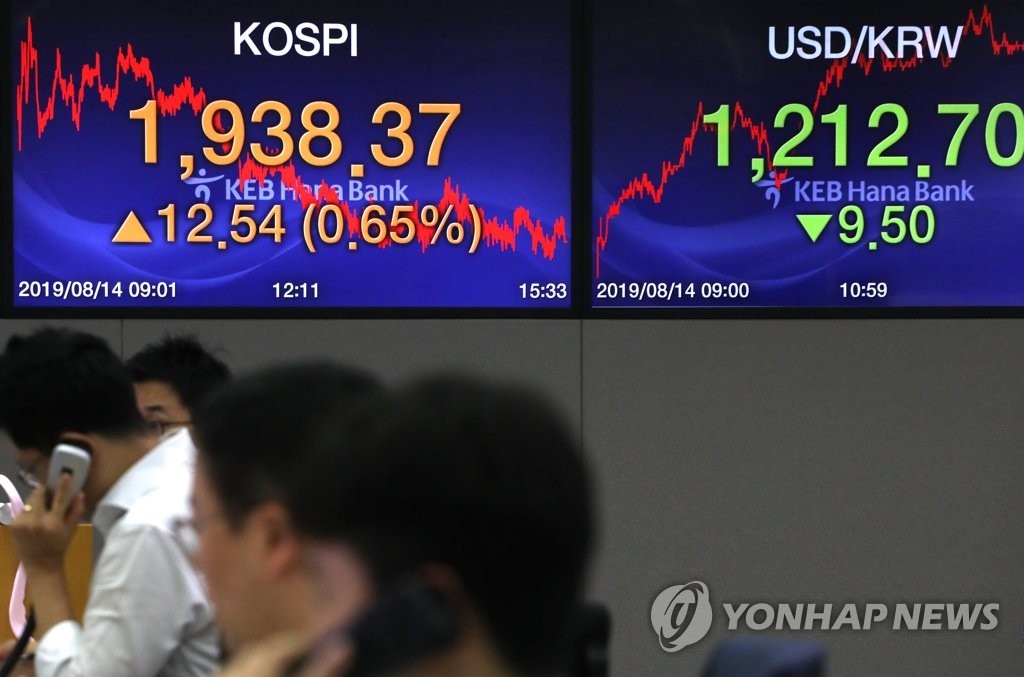 On Tuesday (local time), the U.S. announced that it would delay imposing tariffs on some imported Chinese goods that were set to go into effect next month, a move that abated tension between the world's two largest economies in their protracted trade war.

Washington said tariffs on various consumer electronics, video game consoles and certain items of footwear will be delayed until Dec. 15, giving U.S. retailers a breather to prepare for the holiday shopping season.

Most large-cap stocks gained ground across the board, led by tech shares.

The local currency closed at 1,212.7 against the U.S. dollar, sharply up 9.5 won from the previous session's close.

"Following somewhat eased tension between the U.S and China, the won-dollar exchange rate is expected to return to previous levels," Samsung Futures analyst Jeon Seung-ji said. "However, concerns on a protracted U.S.-China trade war will not disappear easily."

Bond prices, which move inversely to yields, closed mixed. The yield on three-year Treasurys fell 0.1 basis point to 1.149 percent, while the return on the benchmark five-year government bond rose 0.5 basis point to 1.182 percent.