SEOUL, Aug. 14 (Yonhap) -- An appellate court on Wednesday upheld the conviction of a power blogger for carrying out an illicit cyberoperation to influence public opinion in favor of the Democratic Party (DP) ahead of the 2017 presidential election.

The Seoul High Court sentenced Kim Dong-won, better known by his internet alias Druking, to three years in jail after convicting him of manipulating internet comments on news articles in 2017 in favor of the then-main opposition DP and bribing a lawmaker.

Kim's sentence, however, was slightly reduced from an imprisonment of three and a half years handed down by the Seoul Central District Court in January this year. 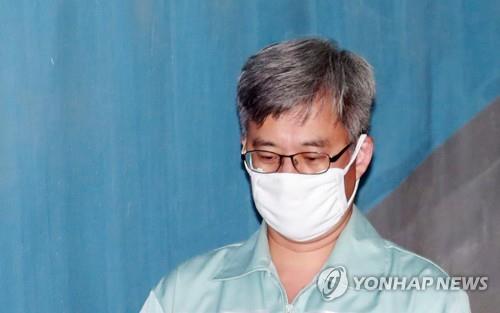 Kim was indicted for running a computer program to artificially jack up the number of "likes" for internet political comments to boost positive public sentiment for the DP and its presidential candidate Moon Jae-in. Moon won the snap election in May 2017, which came after his predecessor Park Geun-hye's ouster from office by the Constitutional Court over an influence-peddling scandal.

Kim was also indicted for paying 50 million won (US$41,200) in illegal political funds to liberal lawmaker Roh Hoe-chan and manipulating evidence to cover up the bribery. Roh jumped to his death in July 2018 amid a special counsel's probe into an allegation that he took political funds from Kim's aide.

The high court said that Kim's manipulation of internet comments constitutes an obstruction of business, while his payment of bribes has been confirmed.

"The manipulation of internet comments is a grave crime that disturbs the formation of sound public opinion. Kim's illegality was vary serious as his act undermined a fair and free election by distorting voters' political decision-making," the court said.

"Kim's demand for a public office in return for his illegal acts was also a serious offense," it said, referring to the accusations that he asked South Gyeongsang Province Gov. Kim Kyoung-soo, who has been charged as a co-conspirator in the case, to procure a consul general job in Japan for one of his associates in return for carrying out the illicit cyberoperations.

As for the reason for reducing Kim's jail term, the court explained that it considered Kim's recent separate conviction in his assault on his wife in determining his sentence.