For the three months that ended in June, net losses widened to 396.3 billion won (US$327 million) from 304.7 billion won a year earlier, Korean Air said in a statement.

"The won's weakness (against the dollar) and lower demand in cargo deliveries amid a U.S.-China trade war cut into the quarterly bottom line," a company spokesman said over the phone.

The won fell to an average of 1,165.91 against the greenback in the second quarter, from 1,078.57 a year ago, according to the Bank of Korea. A weak won drives up not only fuel purchasing costs but also the value of dollar-denominated debts when converted into the local currency.

Looking ahead, the country's biggest full-service carrier worried that the ongoing anti-Japan campaign will dampen travel demand to the neighboring country for the rest of the year and could have an impact on its annual earnings results.

In response to a decline in travel demand following Japan's exclusion of South Korea from its list of trusted trading partners early this month, Korean Air said it plans to suspend the Busan-Sapporo route from Sept. 3 and replace existing planes on Japanese routes with smaller ones.

"To offset lower demand to the neighboring nation, the company will increase flights on non-Japan routes for the rest of the year," the spokesman said. 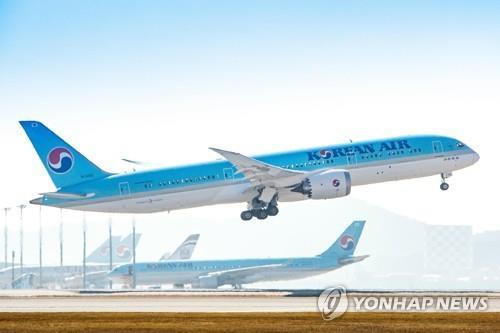