For the three months that ended in June, net losses widened to 202.4 billion won (US$167 million) from 46.8 billion won a year earlier, Asiana said in a statement.

"The won's weakness against the dollar and lower demand in the cargo delivery business amid the U.S.-China trade war had an impact on the quarterly results," a company spokesman said by phone.

The won fell to an average of 1,165.91 against the greenback in the second quarter, from 1,078.57 a year ago, according to the Bank of Korea. A weak won drives up not only fuel purchasing costs but also the value of dollar-denominated debts when converted into the local currency.

Looking ahead, Asiana expressed grave concerns about a fall in travel demand to Japan.

In response, Asiana is planning to reduce the number of flights on its routes to Japanese destinations, such as Fukuoka, Osaka and Okinawa, starting in mid-September. The Busan-Okinawa route will be suspended from Aug. 23.

A series of export curbs imposed by Tokyo on Seoul has sparked a "Boycott Japan" campaign here against Japanese products and travel to the neighboring country. 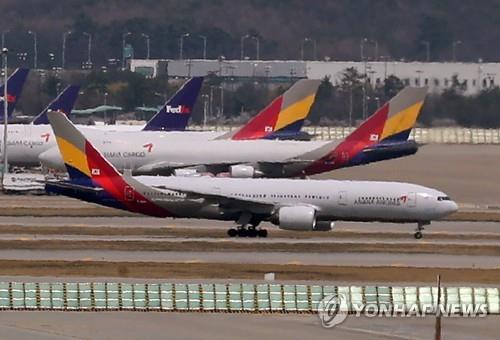