SEOUL, Aug. 15 (Yonhap) -- Delivering a high-stakes Liberation Day speech Thursday, President Moon Jae-in notably refrained from criticizing Japan over a deepening trade row and instead placed an emphasis on the need for cooperation.

Moon used the words cooperation and prosperity 16 and 18 times, respectively, in the nearly half-hour address televised live, softening the tone of his public message on Japan's recent export restrictions against South Korea.

Moon made clear that he hopes to resolve the problem through dialogue.

"Better late than never: If Japan chooses the path of dialogue and cooperation, we will gladly join hands," he said. "We will strive with Japan to create an East Asia that engages in fair trade and cooperation." 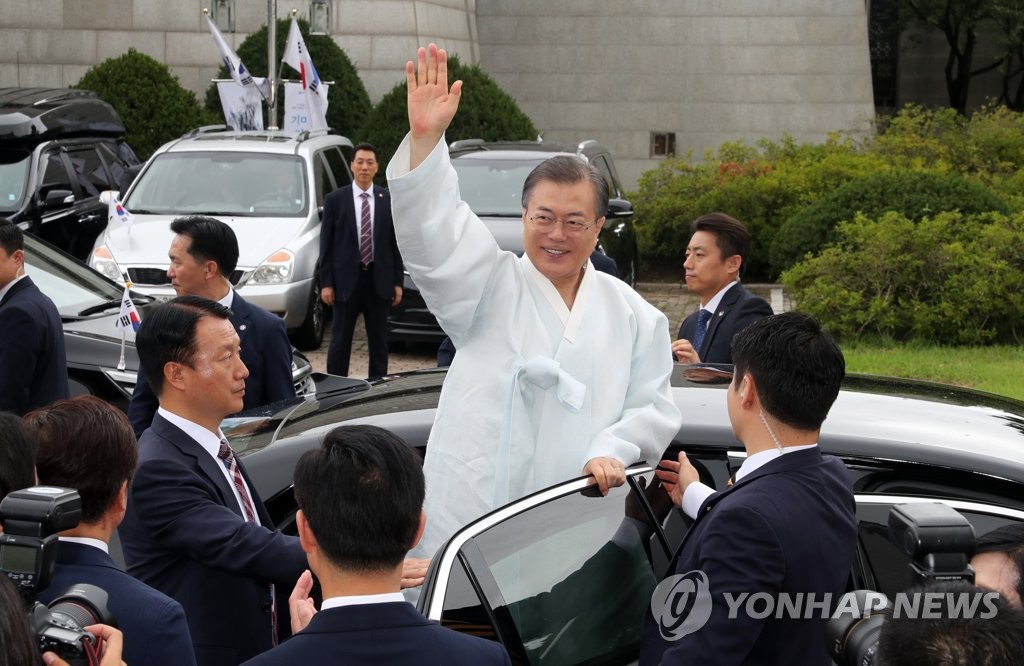 Since Tokyo initiated the trade fight with Seoul in early July, Moon had churned out strongly worded statements against the neighbor.

In response to Japan's Cabinet decision on Aug. 2 to remove South Korea from the whitelist of "reliable" trade partners in terms of national security, Moon warned that Tokyo would be held responsible for severe consequences. He characterized Tokyo as "selfish" and declared that South Korea won't be defeated again.

Concern has grown about emotionally charged responses to Japan's measure as some South Koreans have called even for Seoul's boycott of the 2020 Tokyo Olympics.

"It will be a golden opportunity for East Asia to solidify the framework of friendship and cooperation and to progress along the path toward common prosperity," Moon said.

Just as people around the world witnessed a "peaceful Korean Peninsula" at the PyeongChang Games, Moon said he expects the Tokyo Olympics to turn out to be "a source of hope for friendship and cooperation."

Moon's latest speech indicated that his government maintains the so-called two-track approach of dealing resolutely with historical issues related to the 1910-45 colonization, but at the same time, seeking to foster forward-looking bilateral ties.

His address was closely watched for signs of how Seoul will handle the trade spat with Tokyo in the coming weeks and months.

Next week, for instance, the Moon administration will decide whether to keep a pact with Japan on sharing military information, known as the General Security of Military Information Agreement (GSOMIA).

The pact's fate will likely depend on Japan's response to Moon's olive branch.

The foreign ministers of South Korea and Japan -- Kang Kyung-wha and Taro Kono -- are expected to visit Beijing next week for trilateral talks with their Chinese counterpart, Wang Yi. China is the rotating chair of this year's tripartite summit. 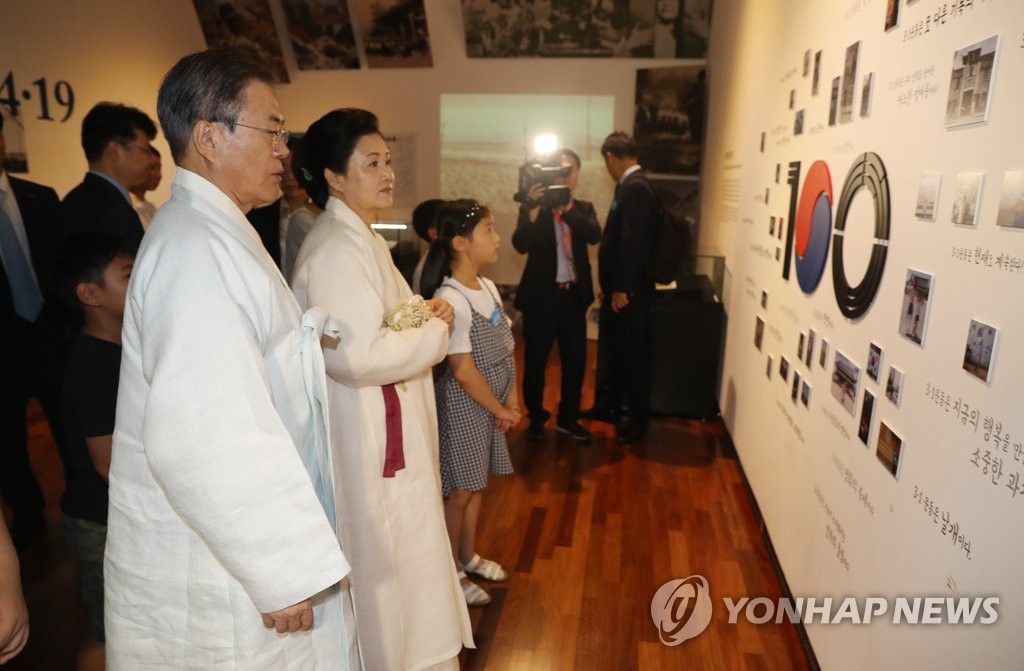 Observers agreed that Moon has left the possibility of diplomacy open for a resolution to the stand-offs.

"His references to Japan highlighted the importance of economic cooperation, warned against the weaponization of trade and left the door open for diplomacy," Leif-Eric Easley, associate professor of international studies at Ewha Womans University in Seoul, said in an emailed comment.

He pointed out the president made no mention of such sensitive historical matters as wartime labor and "comfort women" who were systemically recruited to serve as sex slaves for Japanese troops.

"Instead, the focus was on Korea's ability to overcome historical challenges and determine its own internationally significant role," he said.

For the audience at home, meanwhile, Moon focused on making the case that South Korea should become a "strong, responsible and unshakable" economic powerhouse through inter-Korean cooperation and peace.

It was quite unusual for a South Korean leader to articulate and detail a long-term economic growth vision in his or her Liberation Day speech.

Tokyo's export control was a wake-up call for some of South Korea's tech industries, which have relied heavily on its supply of key materials.

"We will transform the structure of our economy into an ecosystem marked by inclusiveness and co-existence," he said. "We will also channel our efforts into enhancing the competitiveness of domestic materials, parts and equipment industries through mutually beneficial cooperation between SMEs and conglomerates, as well as between labor and management.

By encouraging scientists and engineers to take on new challenges and embracing unsuccessful attempts, Moon added, South Korea will "build an economy that will never be shaken."

The ruling Democratic Party said the president has effectively "painted a bright future" of South Korea.

It also took note of Moon's stated goal of creating "one Korea" by 2045, the centennial of the liberation.

The main opposition Liberty Korea Party downplayed it as "pointless rhetoric," which lacks a realistic way to ride out economic difficulties.

Under the Moon administration, South Korean has become a nation that "everyone can shake up," the party's spokesperson, Rep. Jun Hee-kyung, said.