(ATTN: UPDATES throughout with press briefing, other details; MODIFIES headline)
By Lee Chi-dong

In general, however, Moon's office maintained a strategy of not overreacting but responding calmly to Pyongyang's continued military provocations and warning messages.

Cheong Wa Dae views them as aimed mainly at demonstrating its anger over the ongoing joint military drills between South Korea and the United States.

Both flew around 230 kilometers at an apogee of 30 km and a top speed of around Mach 6.1 before falling into the East Sea, according to the South's Joint Chiefs of Staff (JCS).

It was the North's sixth round of such projectile launches since late July.

Summarizing the results of the hourlong NSC session for media, Cheong Wa Dae said the "combined command-post exercise" is part of Seoul's preparations to regain wartime operational control (OPCON) of its troops from Washington.

Participating top security officials urged Pyongyang to halt launches of "short-range projectiles," expressing worries that such acts would escalate military tensions on the peninsula, according to Cheong Wa Dae. 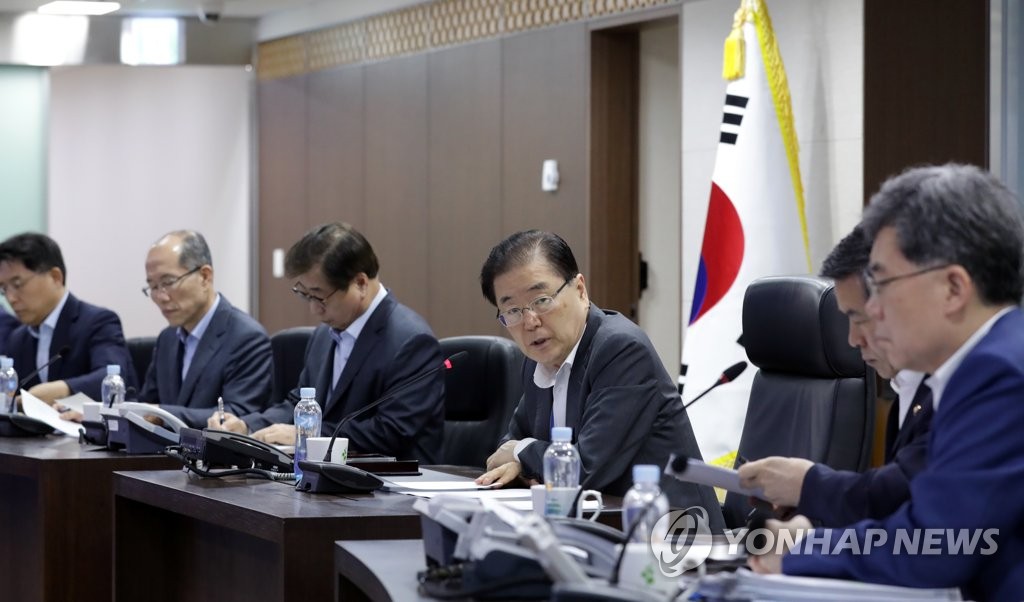 They did not reveal the specifics of what were fired earlier in the day, saying a further analysis supported by the U.S. is required.

Speaking to reporters at a separate press briefing, a Cheong Wa Dae official also stressed that the military training is linked with the OPCON transition plan.

The North has traditionally labeled the allies' joint military practices as a rehearsal for invasion. It has often fired missiles or other rocket systems in protest.

In that sense, he added, what the North's Committee for the Peaceful Reunification of the Country stated early Friday morning "does not help mature development of South-North relations."

Cheong Wa Dae believes that inter-Korean relations should take another step forward for peace and prosperity in consideration of three rounds of bilateral summits in 2018 and the spirit of the accords, the official added.

In the statement, carried by the North's official news agency, the country's organ handling inter-Korean affairs said Pyongyang won't talk with Seoul even if the joint military training finishes next week.

It was expressing displeasure with Moon's Aug. 15 Liberation Day speech, in which he presented his "one Korea" vision for the two Koreas to be reunited by 2045.

"A sure thing is that the (South) Korean chief executive is (such a) funny man as he just reads what was written by his juniors," the committee's unnamed spokesperson said.

Pyongyang's intentions behind the series of missile launches and verbal attacks against Seoul are seen as having multiple purposes.

Experts say the North is apparently campaigning to make progress in missile technologies while trying to raise bargaining leverage in working-level talks with the U.S. expected to take place in the near future for discussions on a possible third summit.

The North's leader Kim Jong-un may be also seeking to appease hard-line officials in his regime before the resumption of nuclear negotiations, they said, as Pyongyang has refrained from lashing out at U.S. President Donald Trump.