SEOUL, Aug. 16 (Yonhap) -- South Korea's political parties all expressed regrets over North Korea's latest launch of projectiles on Friday, though the focus of their criticism differed.

North Korea fired two unidentified short-range projectiles into the East Sea shortly after 8 a.m. It was the North's sixth round of ballistic missile or other projectile launches since late July. The launch was seen as aimed at protesting this month's joint military exercise by South Korea and the United States.

The ruling Democratic Party and minor liberal parties -- the Justice Party and the Party for Democracy and Peace -- stressed North Korea should halt military provocations and return to dialogue, while the main opposition Liberty Korea Party (LKP) and conservative Bareunmirae Party leveled their criticism at the Moon Jae-in government's North Korea policy. 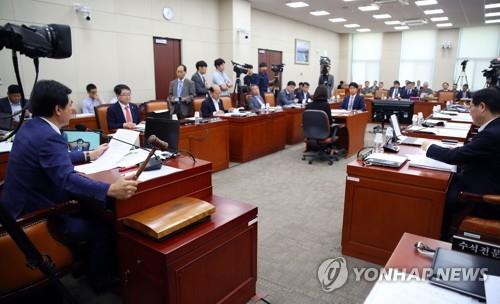 "North Korea's reaction could threaten efforts for permanent peace on the Korean Peninsula and is not desirable for peace in East Asia, let alone global peace," Lee Hae-sik, a spokesman of the Democratic Party, said in a written briefing.

Lee then linked the North's provocative military acts to the South Korea-U.S. military drill and Seoul's mid-term defense plan, as well as Pyongyang's own efforts to improve its missile capabilities. He also expressed hope for an early resumption of dialogue between the North and the U.S. and an improvement in inter-Korean relations.

Justice Party spokesman Kim Jong-dae said in a commentary that North Korea's provocation is "illogical, impulsive and self-destructive," while urging the Pyongyang regime to resume dialogue with Seoul.

The Party for Democracy and Peace also stressed the resumption of dialogue, voicing regret at the North's way of responding to Moon's repeated call for a "peace economy" between the two Koreas.

Kim Hyun-ah, a spokeswoman of the LKP, said that the Moon government's silence on the North's military provocations has resulted in its eighth missile launch this year.

"Now is the time to sever the Mobius strip between the (North's) provocations and (Moon's) silence. The president's self-praise won't prevent North Korea's missile provocations," Kim said. She also said the people are angry at the failure of Cheong Wa Dae and the ruling party to respond to Pyongyang's repeated insults against Moon.

The Bareunmirae Party said in a commentary, "Moon vowed to build an 'unshakeable country' in his National Liberation Day address yesterday. But our country's security was shaken in just one day. The North has responded to Moon's patience with missiles and insults."