SEOUL, Aug. 18 (Yonhap) -- South Korea on Sunday commemorated the death of former liberal President Kim Dae-jung 10 years ago, as the nation remembers his dedication to democracy and efforts to improve ties with North Korea and Japan.

Kim, a longtime opposition leader and pro-democracy fighter, led the country from 1998-2003. He is credited with leading the nation to tide over a financial crisis and launching inter-Korean peace efforts with his "sunshine policy," for which he won the Nobel Peace Prize in 2000. 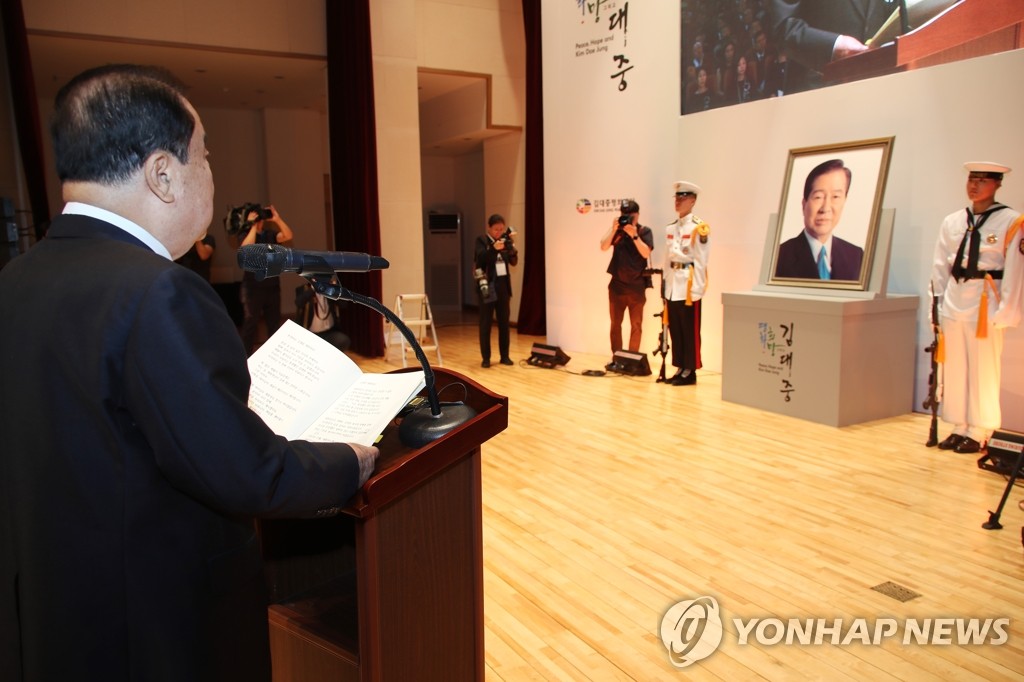 Before the commemorative event, incumbent President Moon Jae-in paid respects to the late leader, enumerating Kim's feats as a statesman, such as the nation's democratic progress and cross-border cooperation.

"Because of President Kim Dae-jung who held the hands of citizens, moved a half step forward and finally made progress in the country's democracy and peace, we have become able to harbor greater hopes," Moon tweeted.

"As he opened a new horizon for peace on the Korean Peninsula at that time, we were able to successfully host the PyeongChang Winter Olympics as the 'Peace Olympics,' and are able to take the courage to take a path for co-prosperity by boldly using our imagination for denuclearization of the peninsula and a peace economy," he added.

Moon has been pushing for the "peace economy" to promote inter-Korean economic cooperation, find new growth engines and achieve co-prosperity on the peninsula and beyond amid trade tensions caused by Japan's recent export curbs against South Korea.

Moon also touched on the 1998 declaration between Kim and then Japanese Prime Minister Keizo Obuchi on building a future-oriented partnership. In it, Obuchi expressed "keen remorse" and apologized for "great damage and pain" that Japan imposed on South Koreans through its 1910-45 colonization of the peninsula.

"The joint declaration put in writing Japan's 'keen remorse' and apology from its heart and was a pledge for the peoples of the two countries to share the lessons of history and open together the future of peace and prosperity," Moon said.

"A path for the people to live well, a path to achieving a lasting peace and a path for cooperation between South Korea and Japan ... All these are a path of history that (we) should advance," he added.

At the memorial ceremony, Assembly Speaker Moon also highlighted the late president's achievement in facilitating reconciliation and cooperation between Seoul and Tokyo.

"(Based on the Kim-Obuchi declaration), we will actively and confidently address the difficulties," he said, referring to the ongoing acrimonious row with Japan over trade and history.

"(The former president) stressed in his speech at the Japanese parliament that it was the time for the two countries to forge a future-oriented relationship while squarely facing history. That was an insight and wisdom that saw through the past, present and future of the South Korea-Japan ties," he added.

In his memorial address, Prime Minister Lee stressed that the incumbent government has made progress in democracy, inter-Korean relations and other areas based on the late president's legacies.

"That you were there (as president) was a great blessing for our Koreans. You will remain alive as a great history for our future generations and a teacher for good," Lee said. "We will follow in the president's footsteps, believing 'life is beautiful and history will develop' as you said." 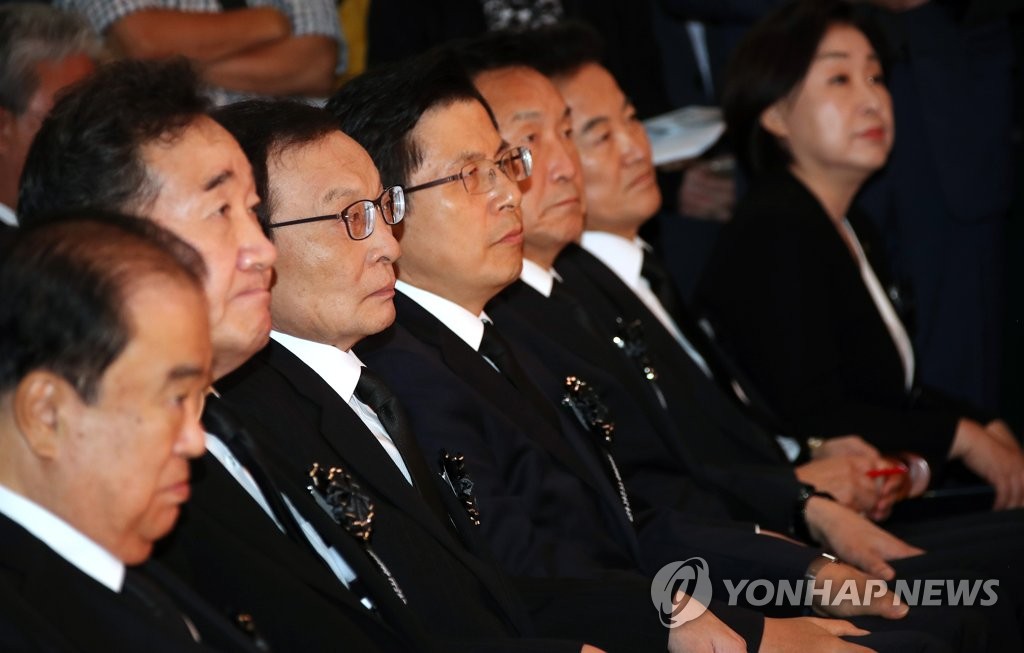 The leaders of the ruling and opposition parties also attended the ceremony.

Lee Hae-chan, the chief of the ruling Democratic Party, praised the former president's pro-democracy movement and contribution to peace in Korea.

"(Kim) has elevated the level of the world's democracy and peace by a notch by faithfully practicing the ideas of democracy, human rights, peace and integration," Lee said.

Hwang Kyo-ahn, the head of the main opposition Liberty Korea Party, voiced hope that citizens can converge on a path that Kim charted for peace.

"In his great footsteps, our country should move toward one full of freedom, prosperity, peace and happiness," he said.