SEOUL, Aug. 18 (Yonhap) -- Ku Hye-sun and Ahn Jae-hyun may be the second Korean top-star couple to divorce this year as their talent agency announced Sunday that they have decided to part ways after three years of marriage.

"Despite encouragements and anticipations from many people, the two actors have recently reached a point where they can no longer continue their marriage life due to various problems and decided to part ways after serious discussions," HB Entertainment said in a release.

"As their management agency, the company respects the two people's decision that came after several months of serious discussions and hopes they will live more happily apart." 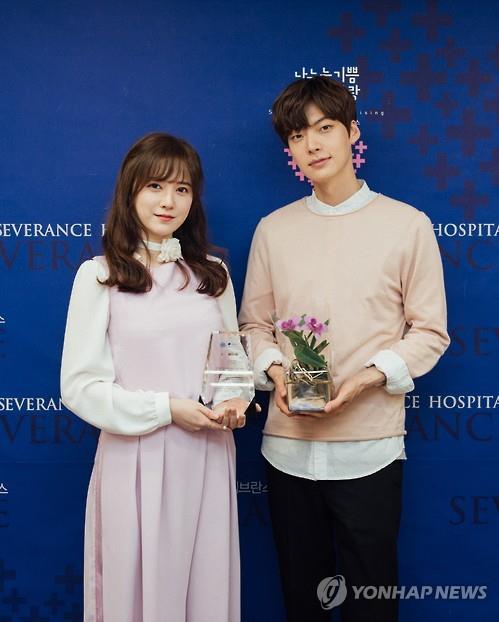 Ku wants to file for court mediation for her divorce within this month so the divorce can be settled by September, the agency said.

But the actress partly denied the announcement in her Instagram, saying the press statement was released without her consent.

"We discussed divorce but have yet to agree on anything. ... I want to keep my family," she said.

Ku and Ahn, who met on the set of KBS 2TV's fantasy-medical series "Blood," began dating in 2015 and tied the knot the following year.

Ku, 35, debuted in 2002 in a television commercial and became a star actress through a number of hit shows, including MBC TV's sitcom "Nonstop" and KBS 2TV's romantic series "Boys Over Flowers." The actress recently debuted as a film director, a painter and a writer.

Ahn, 32, gained instant popularity in 2014 for his supporting role in "My Love From the Star," playing the rebellious younger brother of the heroine Cheon Song-yi, played by actress Jun Ji-hyun. He was one of the main hosts of the second season of tvN's entertainment show "New Journey to the West."

Shortly after their marriage, they together appeared in the reality TV show "Newlywed Diary," which explored their newly married life.

When their divorce is decided, they will become the second high-profile Korean celebrity couple to separate this year.

Last month, actors Song Hye-kyo and Song Joong-ki ended their one year and nine months of marriage as the court approved the divorce settlement.
(END)