SEOUL, Aug. 19 (Yonhap) -- The South Korean unit of Apple Inc. employs 500 workers and has helped create more than 300,000 jobs here over the past 20 years, according to its website Monday.

It marks the first time since the U.S. tech giant's entry into South Korea in 1998 that the company has unveiled the workforce of its local subsidiary.

The newly opened "job creation" section of the Korean-language website said Apple's local unit started with only two employees, but its payroll had increased to some 500 as of end-June.

In particular, the headcount of the Apple unit has spiked a whopping 1,500 percent from 2010. The company sharply increased its workforce in 2017 to prepare for its app store that opened here in 2018. 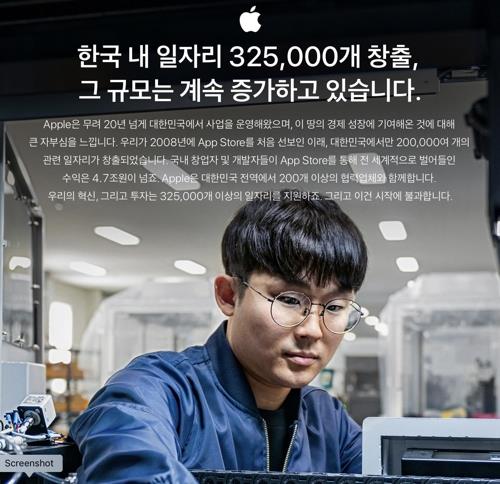 Apple also said it has contributed to creating 325,000 jobs in Asia's fourth-largest economy so far via about 200 suppliers and its app store ecosystem.

It is also the first time for Apple to disclose the number of local suppliers, which includes steel giant POSCO.

The website's job creation section is widely seen as Apple's attempt to highlight its emphasis on the South Korean market and explain its activities here.

Apple has been operating job creation websites in the United States, Europe, Japan and China for years.
(END)