SEOUL, Aug. 19 (Yonhap) -- President Moon Jae-in called on North Korea and the United States on Monday to seize the current chance to achieve denuclearization and lasting peace, as Seoul and Washington are wrapping up their combined military drills.

The allies kicked off the "command-post" exercise on Aug. 5. In response, North Korea demonstrated its own firepower with the test-firing of a salvo of short-range missiles and other rocket systems.

South Korea and the U.S. plan to end the training Tuesday, which is expected to help cool renewed tensions on the peninsula.

Pyongyang and Washington are seeking to hold working-level talks for a third summit. The move is a fruit of spontaneous talks between President Donald Trump and the North's leader Kim Jong-un at the DMZ village of Panmunjom on June 30.

"If this opportunity is lost, there's no saying when we will be able to create this opportunity again," Moon stressed at the outset of his weekly meeting with top Cheong Wa Dae aides, which was open to media. 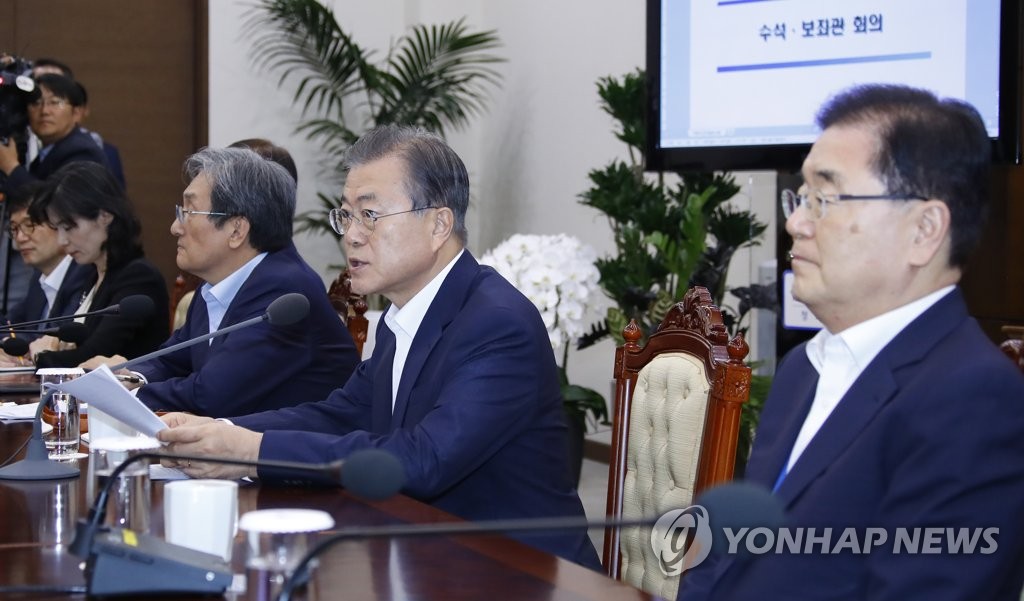 Thus, he added, the Koreas and the U.S. should cherish the chance like "a thousand pieces of gold" and seize it.

He called for a careful step forward, as if "handling a fragile glass bowl," on the basis of "wisdom and sincerity" to understand each other's position.

He emphasized the need to avoid acts to obstruct dialogue, apparently alluding to the North's recent missile launches and warning messages.

Last week, the North's organ dealing with inter-Korean affairs issued an unusually strong-worded statement criticizing the president. The Committee for the Peaceful Reunification of the Country said Pyongyang will never sit down with Seoul for talks. It also warned Moon against expecting that talks will resume "automatically" after the allies' drills finish.

The unpredictable communist nation's attitude has raised concern here that South Korea may be sidelined in the peace process.

Moon said his government will continue its peace journey in a "bold" manner. He reiterated his "peace economy" vision, saying it's a task to dismantle the planet's last remaining Cold War regime and work to change the fate of the Korean Peninsula by liquidating more than 70 years of confrontation and mistrust.

Moon is credited with having initiated the Korea peace process, which has been going slower than expected.

Despite some troubles, the ongoing "dialogue phase" has not come easy, he pointed out.

"It was made with difficulty like a miracle, powered by the determination and decision of the leaders of South and North Korea and the U.S.," Moon said.

U.S. Special Representative for North Korea Stephen Biegun is scheduled to arrive in Seoul on Tuesday for a three-day stay. Some observers say he may meet North Koreans at Panmunjom during his upcoming trip.