SEOUL, Aug. 19 (Yonhap) -- Four more F-35A fighter jets are scheduled to arrive in South Korea later this week, military sources said Monday, which will bring the total number of the stealth fighters in the country's Air Force to eight.

The fifth-generation radar-evading warplanes, manufactured by the U.S. defense firm Lockheed Martin, are set to arrive at the 17th Fighter Wing in Cheongju, 140 kilometers south of Seoul, as early as Thursday, according to the sources.

So far, four F-35As have arrived here -- two in March and the rest in July, under Seoul's plan to deploy a total of 40 stealth fighters through 2021. By the end of this year, 10 F-35As are to arrive in South Korea, according to the Defense Acquisition Program Administration (DAPA).

The date of full operational deployment has yet to be decided, though a ceremony to publicize their introduction is widely forecast to take place around October when the Air Force is to celebrate the 70th anniversary of its foundation.

The planned arrival comes at a time when North Korea has intensified its criticism against South Korea for the introduction of advanced weapons, claiming that such a military buildup is aimed at destroying North Korea and threatens peace on the Korean Peninsula and in the region. 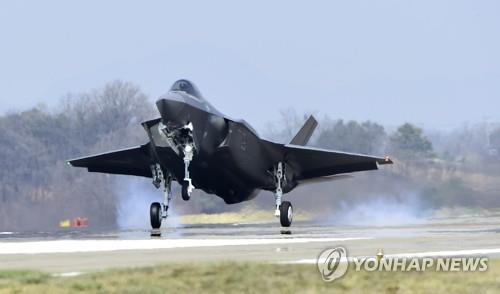