Asiana shares soared 26 percent to an intraday high of 6,240 won before closing at 5,500 won. The broader KOSPI gained 0.7 percent.

Kumho Asiana Group, a South Korean airline-to-petrochemical conglomerate, aims to sell a 31 percent stake in Asiana Airlines held by its affiliate Kumho Industrial Co. together with its two budget carrier units -- Air Seoul Inc., which is wholly owned by the airline, and 46 percent owned Air Busan Co. -- as part of its broad restructuring efforts.

The stake was worth US$282 million at Friday's closing price. If a management premium is added, the acquisition price could reach up to 2.5 trillion won, analysts said.

The Korea Corporate Governance Improvement (KCGI) fund is "at the initial stage of reviewing the information memorandum (IM) we have received from Credit Suisse to decide on whether to acquire the airline," KCGI Chief Executive Kang Sung-boo said over the phone.

"We are considering forming a consortium with companies that have an interest in acquiring the airline," he said. 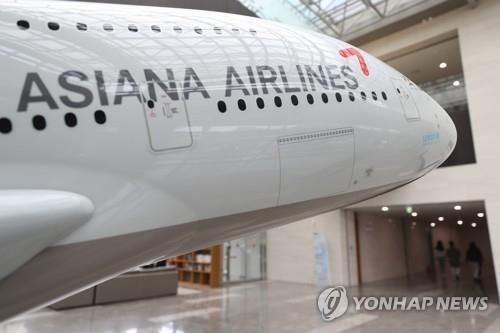 Conglomerates such as SK, CJ, Hanwha and Aekyung have been mentioned as potential bidders for the country's second-biggest full-service carrier after Korean Air Lines Co., though they have denied the rumors or said they will look at a deal.

When contacted by Yonhap on Monday, Aekung said the company is reviewing the IM sent by Credit Suisse. CJ reiterated its earlier stance that it is not interested in a deal.

Hanwha and SK said they have not received an IM from Credit Suisse and have no interest in a deal.

Kumho Asiana Group plans to sell the airline within this year. The group is expected to receive initial bids in September and final bids in October.

In the January-June period, the airline's net losses widened to 292 billion won from 43 billion won a year earlier due to the won's weakness against the dollar. A weak won drives up not only the value of dollar-denominated debts when converted into the local currency but also fuel purchasing costs.

It owes financial institutions a total of 2.7 trillion won in short-term obligations, with 660 billion won of loans maturing this year.