WASHINGTON, Aug. 19 (Yonhap) -- U.S. Special Representative for North Korea Stephen Biegun's upcoming trip to South Korea is fanning speculation of a possible meeting between him and North Korean officials on the inter-Korean border this week.

The timing of his visit -- Tuesday to Thursday -- is conspicuous because it starts on the day military exercises between Seoul and Washington end, the same day the North has said it would be ready to resume talks with the U.S.

If a meeting is realized, it would mark the resumption of denuclearization negotiations that have stalled since a second summit between U.S. President Donald Trump and North Korean leader Kim Jong-un in February ended without a deal.

A meeting would also bring to fruition an agreement to resume working-level talks reached during Trump and Kim's impromptu encounter at the inter-Korean border village of Panmunjom in June. 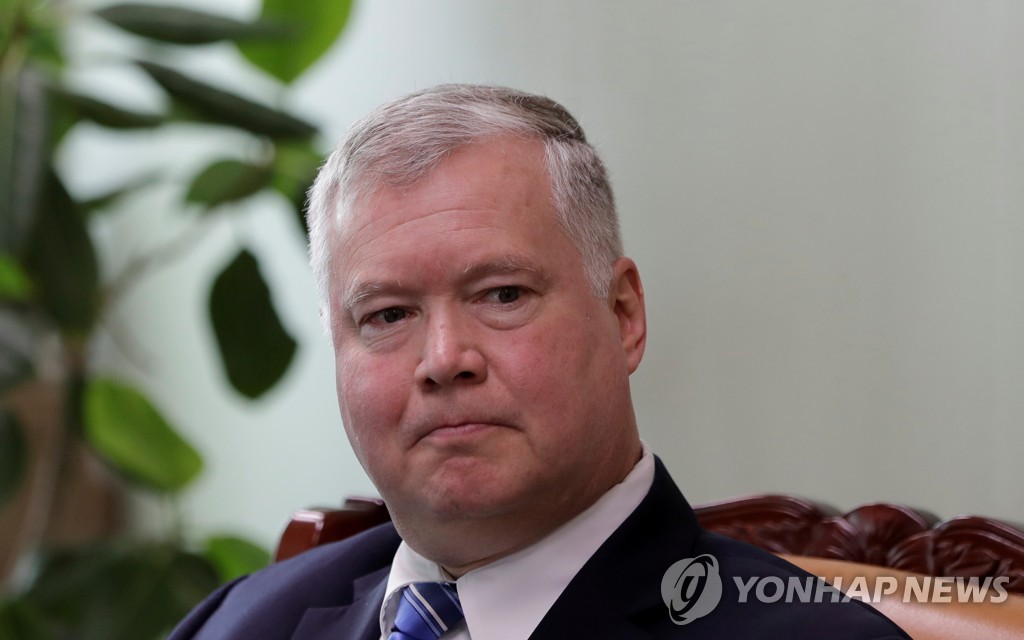 Biegun has used previous visits to Seoul to meet with his North Korean counterparts.

In February, the special representative took a three-day trip to Pyongyang to prepare for the second summit that took place in Hanoi, Vietnam, at the end of the month.

In June, he traveled to Panmunjom to enable a last-minute meeting between Trump and Kim following the U.S. president's invitation by tweet.

Asked about the possibility of a similar move by Biegun this week, a State Department spokesperson told Yonhap News Agency Monday, "We don't have any additional meetings to announce."

The State Department had announced Friday that Biegun would travel to Japan and then South Korea to meet with officials in both countries and "further strengthen coordination on the final, fully verified denuclearization" of the North.

It provided no other details.

Harry Kazianis, senior director of Korean studies at the Center for the National Interest, said the conclusion of the military exercise creates an opening for American and North Korean diplomats to meet again soon.

"While I would hope and expect that Biegun will meet with North Korean officials this week along the DMZ, we should not be shocked, nor consider it a setback, if the North Koreans refuse," he said, referring to the Demilitarized Zone along the inter-Korean border.

"They want to wait a few weeks to let the U.S.-South Korea drills pass from the North Korean public's recent memory before engaging in diplomacy," he added.

North Korea has long condemned the annual military exercises as rehearsals for invasion despite repeated assurances from Seoul and Washington that they are defensive in nature.

But waiting too long could increase uncertainty over the future of denuclearization talks.

Biegun has widely been reported to be Trump's pick for U.S. ambassador to Russia, with the current ambassador, Jon Huntsman, due to step down in October.