SEOUL, Aug. 20 (Yonhap) -- South Korean Foreign Minister Kang Kyung-wha arrived in Beijing on Tuesday for meetings with her Chinese and Japanese counterparts over three-way cooperation and a possible summit among their leaders.

Her trip drew keen attention as she plans to meet bilaterally with Japanese Foreign Minister Taro Kono on Wednesday afternoon amid heightened tensions between the two countries over trade and history.

Their meeting comes at a delicate time when Seoul is mulling whether to renew a bilateral military intelligence-sharing accord with the deadline for its decision set for Saturday.

Shortly before departure, Kang said that Seoul is still reviewing whether to retain the pact, which is to be renewed automatically each year unless either side expresses an intent to terminate it.

"There isn't anything decided yet (on the pact)," she told reporters at Gimpo International Airport. "I am on my way there as I am prepared to actively explain our position related to Japan's export restrictions." 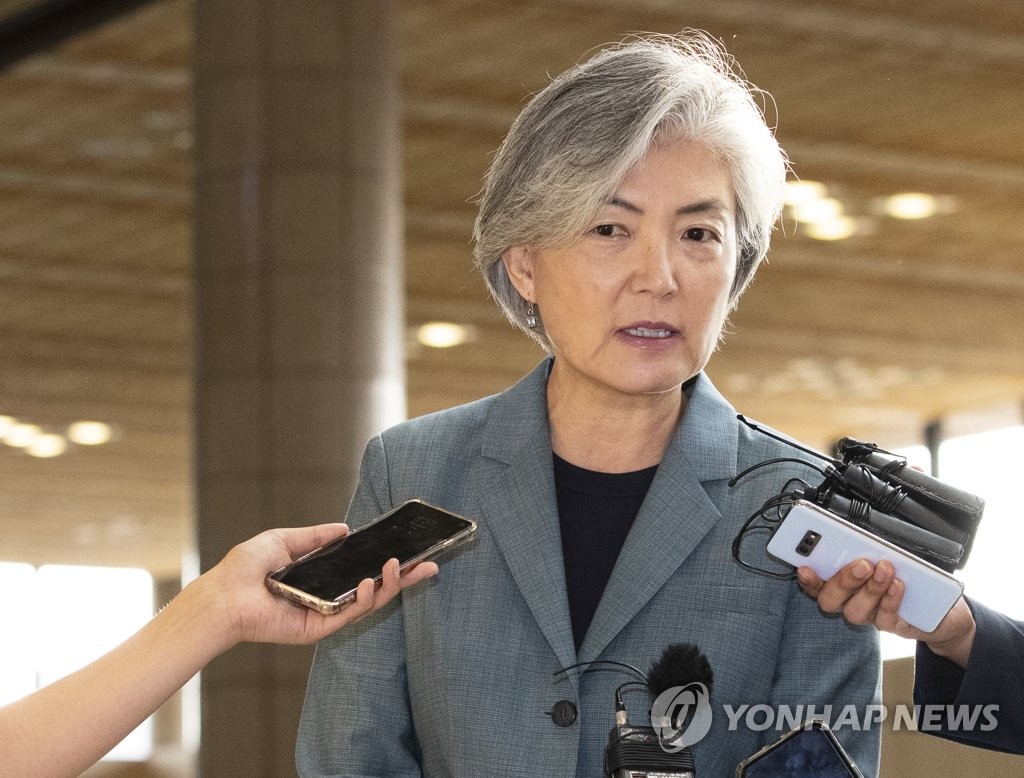 South Korea has been calling for a diplomatic solution while denouncing Japan's export restrictions as running afoul of the principles of free trade, which Tokyo has long championed and benefited from.

Hours after her arrival in Beijing, Kang and Chinese Foreign Minister Wang Yi were set to hold bilateral talks. The trilateral meeting, the first such gathering since August 2016, is slated to take place Wednesday morning.

"We expect that the foreign ministers' talks this time will contribute to further developing the three-way cooperation system and improving bilateral relations in the Northeast Asia region," Lee Jae-woong, deputy spokesman of Seoul's foreign ministry, told a regular press briefing.

During the talks, Kang, Wang and Kono are expected to discuss the possibility of arranging a tripartite summit among Moon, Chinese President Xi Jinping and Japanese Prime Minister Shinzo Abe. The last trilateral summit was held in Tokyo in May last year.

The foreign ministers' talks could also touch on the Korean peace process, including ongoing efforts to relaunch nuclear negotiations between Washington and Pyongyang.

During their impromptu talks at the inter-Korean border on June 30, U.S. President Donald Trump and North Korean leader Kim Jong-un agreed to resume working-level nuclear talks. But the talks have not been held amid the North's angry reactions to the South Korea-U.S. military exercise.

The three-way meeting of the top diplomats was launched in 2007 to promote tripartite cooperation in various areas, including regional security and business.