Biegun made the remarks after his talks with South Korean counterpart Lee Do-hoon in Seoul, amid growing expectations that Washington and Pyongyang would resume their working-level negotiations on the North's nuclear disarmament.

"First regarding our negotiating team, I wanted to dispel any rumors that I will be leaving this portfolio to take up an ambassadorship abroad," he said.

"I will not be taking up a diplomatic posting in the Russia federation and I will remain focused on making progress on North Korea," he added.

The U.S. envoy also stressed that "as agreed by" North Korean leader Kim Jong-un, President Donald Trump gave his team the assignment to re-start the talks with the North following the leaders' impromptu meeting at the inter-Korean border on June 30.

He went on to say, "We are prepared to engage as soon as we hear from our counterparts in North Korea."

Biegun kicked off his official schedule for a series of meetings with senior Seoul officials, including Unification Minister Kim Yeon-chul. He arrived here from Japan on Tuesday for a three-day visit.

His trip came as the conclusion of a combined South Korea-U.S. military exercise raised the prospects for the resumption of working-level nuclear negotiations between Washington and Pyongyang.

The communist regime had berated the exercise as a rehearsal for invasion, shunning negotiations with the United States, firing a fusillade of short-range projectiles into the East Sea and sharpening its rhetoric against the South.

Biegun and Lee were expected to coordinate the allies' positions and strategies over how to make progress once negotiations with the North are relaunched. 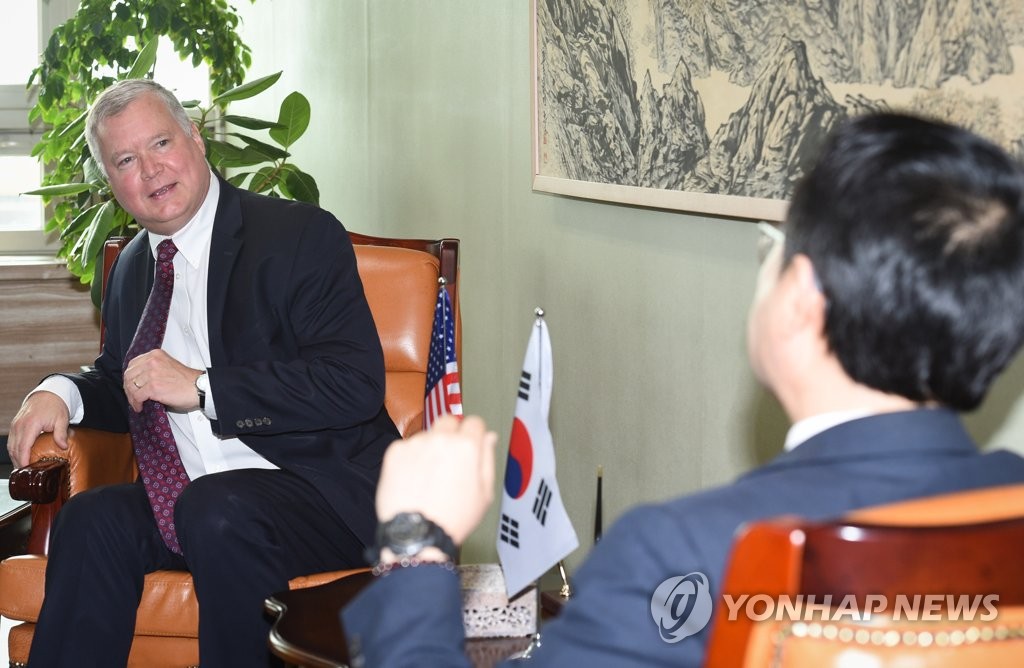 Trump has tweeted that in a recent letter to him, the North Korean leader expressed his desire to relaunch the talks with the U.S. as soon as the allied exercise ends.

(2nd LD) Biegun says will not take up ambassadorship in Russia

(2nd LD) Biegun says will not take up ambassadorship in Russia