SEJONG, Aug. 21 (Yonhap) -- South Korea's exports are set to extend their slump to a ninth month in August, hurt by a decline in outbound shipments of semiconductors, data showed Wednesday.

The country's exports declined 13.3 percent in the first 20 days of August from a year earlier to US$24.9 billion, according to the data compiled by the Korea Customs Service.

South Korea's exports fell 11 percent on-year to $46.1 billion in July, extending their on-year decline for the eighth consecutive month amid a lengthy trade war between the United States and China, and a drop in chip prices.

If the trend continues, it would mark the ninth month in a row that South Korea's outbound shipments have fallen on a yearly basis.

By product, exports of semiconductors, a key export item for Asia's fourth-largest economy, slipped 29.9 percent on-year in the first 20 days of August, the data showed.

Adding to the woes of the U.S.-China trade dispute, Japan's recent export curbs against South Korea are casting a cloud over the Korean economy.

South Korea's imports of Japanese goods fell 8.3 percent on-year in the first 20 days of August, according to the data.

Overall, South Korea imported goods worth $26.7 billion in the 20-day period, down 2.4 percent from a year earlier. 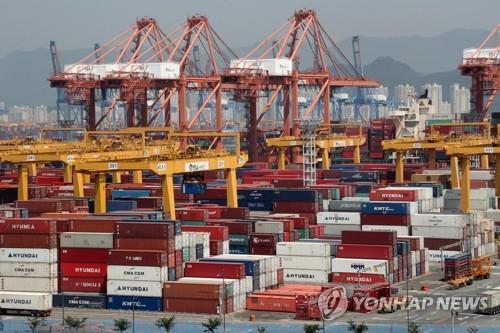