A combined 1.7 trillion won will be invested in data, fifth-generation network services and artificial intelligence next year with an additional 3 trillion won to be spent on system semiconductors, bio-health and future cars, Finance Minister Hong Nam-ki said.

"The planned investment in core infrastructure and new industries is meant to help innovative growth spill over into other industrial sectors," Hong told a government meeting on ways to animate the economy and promote innovative growth.

To that end, the government will introduce an AI voucher program for small and medium-sized enterprises, and push for new projects with a great ripple effect, said Hong, who doubles as the deputy prime minister for economic affairs. 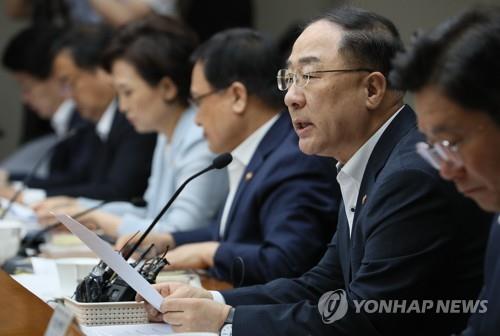 South Korea has been eager to boost the hydrogen economy and other innovative sectors as new growth engines amid slowing exports and investment.

In late July, President Moon Jae-in vowed to redouble the government's push for innovative growth in the manufacturing sector, especially by nurturing globally competitive startups, as part of a long-term response to Japan's trade pressure.

Hong also said the government will take a variety of measures to make the economy more energy-efficient, including incentives for purchasers of high-efficiency TVs, refrigerators and other electronics products.

State-run energy suppliers, including Korea Electric Power Corp. (KEPCO) and Korea Gas Corp., will be given energy-saving targets and be required to invest for greater efficiency, he added.
(END)