SEOUL/BEIJING, Aug. 21 (Yonhap) -- South Korean Foreign Minister Kang Kyung-wha on Wednesday maintained uncertainty over the renewal of a bilateral military information pact with Japan, in an apparent move to raise pressure on Tokyo to retract its recent export curbs.

During her 35-minute talks with Japanese Foreign Minister Taro Kono in Beijing, Kang said that Seoul is still reviewing whether to renew the pact seen as a rare case of bilateral security cooperation. Seoul should determine whether to retain it by Saturday.

With the bilateral trade row showing no signs of abating, South Korea has hinted that it could consider withdrawing from the pact, called the General Security of Military Information Agreement (GSOMIA). The pact is to be automatically renewed each year unless either side voices an intent to terminate it.

"As far as I understand, regarding the GSOMIA, Foreign Minister Kono raised the issue first, and Minister Kang said that (Seoul) is reviewing whether to extend it in broad generalities," an official at the South Korean foreign ministry told reporters. 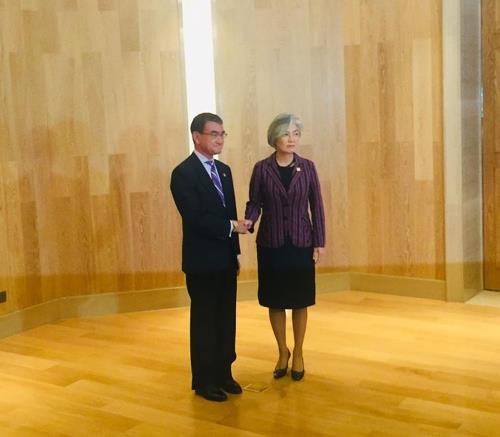 Kyodo News reported that Kono told Kang that Japan wants to maintain the GSOMIA, a pact that is also seen as a crucial element of trilateral security cooperation involving the United States, the mutual ally of the two Asian countries.

Kang and Kono appeared to have failed to narrow any differences, but their talks, the second this month, reflected their will to keep up diplomatic dialogue. They were in Beijing to attend a trilateral meeting with their Chinese counterpart, Wang Yi.

During the talks with Kono, Kang repeated Seoul's call for Tokyo to immediately reverse Japan's export control measures, while voicing regrets over Japan's decision this month to remove South Korea from the "whitelist" of trusted trade partners. The decision is set to take effect next Wednesday.

She also called for Japan's efforts to arrange talks among the two countries' export regulation authorities to address trade tensions.

South Korea has been calling for a diplomatic solution while denouncing Japan's export control measures as running afoul of the principles of free trade, which Tokyo has long championed and benefited from.

Kang and Kono last held bilateral talks on the sidelines of a regional forum in Bangkok on Aug. 1.