Opposition parties urged him to step down, claiming Cho is not qualified to lead the ministry governing the prosecution and law observance. But the ruling Democratic Party (DP) condemned its rivals' attacks as a "political offensive."

The allegations that his 28-year-old daughter received preferential treatment over academic activities have, in particular, sparked a public uproar.

Cho's daughter received scholarships worth 12 million won (US$9,928) at a medical school though she flunked twice. 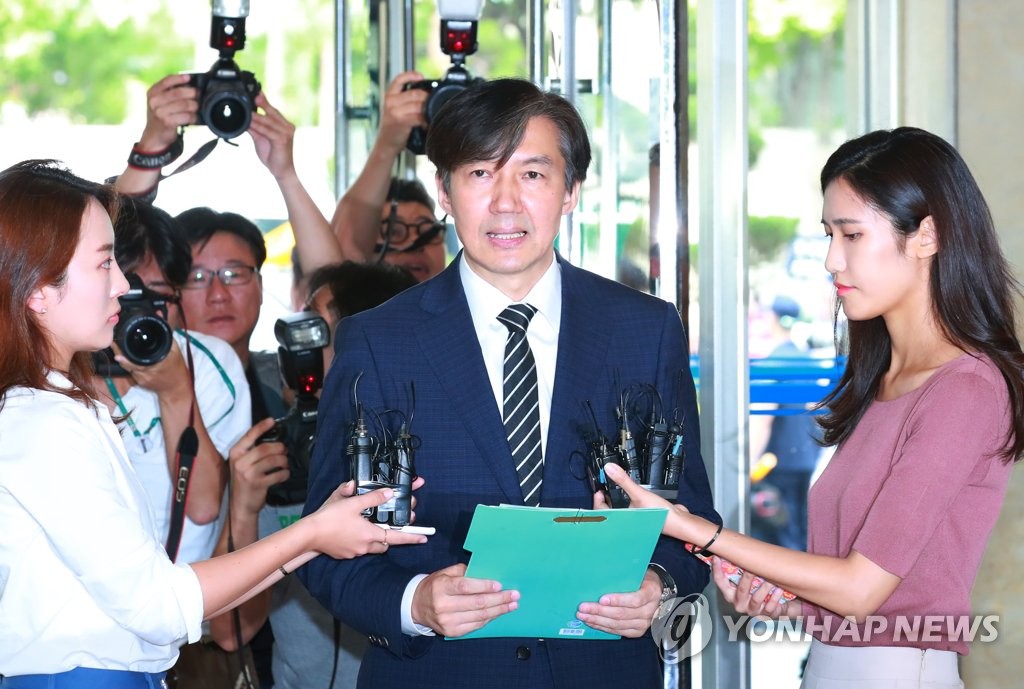 The scandals surrounding Cho, a close confidant of President Moon Jae-in, may evolve into a major political issue as rival parties seek to take the initiative to sway voters' sentiment ahead of next year's general elections.

The main opposition Liberty Korea Party (LKP) and the minor opposition Bareunmirae Party called on Cho to voluntarily give up the nominee status.

"President Moon should withdraw his nomination and apologize to the public," LKP chairman Hwang Kyo-ahn said at a meeting with senior party members.

LKP floor leader Na Kyung-won said her party has decided to file a complaint with the prosecution over suspicion that his daughter received preferential treatment over college entrance.

"If this issue is left intact, the social value of fair (competition) will be completely destroyed," she claimed.

The ruling DP actively defended Cho, apparently out of concerns that his possible failure to be appointed could deal a serious blow to Moon who is heading toward the halfway point of his five-year tenure.

"The party should not make false accusations but cooperate in (setting the schedule for) a confirmation hearing so as to let the public assess Cho's qualifications," he said.

The DP insists the hearing should be held in August before a parliamentary regular session kicks off in September.

A confirmation hearing is widely seen as a formality, as the formal appointment of a minister-level official does not require approval from the National Assembly.

"Some allegations are reasonably raised, but some media outlets are exaggerating allegations. All speculation raised by the media so far will be verified (during the hearing process)," Yoon Do-han, senior Cheong Wa Dae secretary for public communication, told a press briefing.