SEOUL, Aug. 21 (Yonhap) -- The South Korean government will continue to review the issue of whether to maintain a controversial military agreement with Japan "until the last moment," a top Cheong Wa Dae official said Wednesday, citing its significance in regional security cooperation.

The fate of the bilateral General Security of Military Information Agreement (GSOMIA) is one of the hottest political and diplomatic issues here, as this weekend is the deadline for Seoul to decide whether to extend it for another year.

"No decision yet," Kim Sang-jo, Cheong Wa Dae chief of staff for policy, said during a forum hosted by an association of TV journalists. "The government will review it until the last moment."

He pointed out that it's not an easy decision, given the importance of security cooperation in Northeast Asia led by South Korea, the United States and Japan. 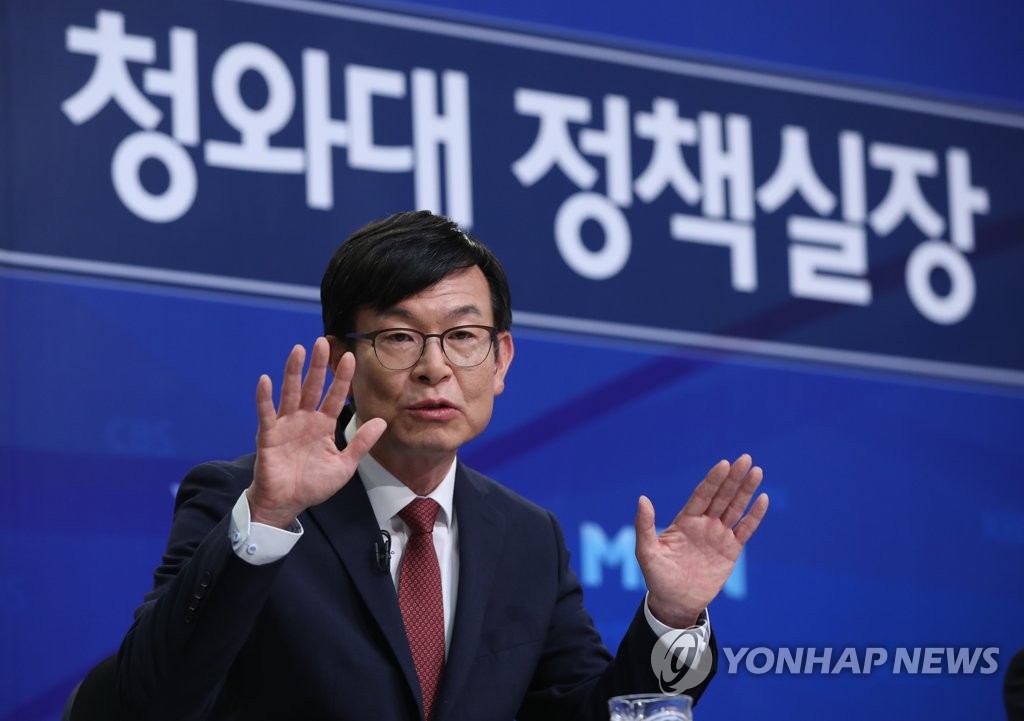 Among factors being considered is if it's appropriate to keep the pact with Japan on sharing military information at a time when Tokyo publicly regards Seoul as unreliable in terms of handling strategic materials, Kim said.

He was referring to Japan's export restrictions against South Korea, highlighted by the removal of Seoul from its whitelist of trusted trade partners in early August.

Under the measure to take effect next week, exports of a total of 1,194 items to South Korea will face a case-by-case review by Japan's authorities.

Kim, however, cautioned the public against being concerned excessively about its impact on South Korea's economy.

Japan's measure does not mean an export ban of the entire 1,194 items, he said, adding most of them will be shipped to South Korea even if it would take some more time for stricter customs procedures.

He said Japan seems to be intending to indirectly hit South Korea's economy by ratcheting up "uncertainty."

"The (key) point is for the government to stabilize the supply line, lessen dependence on imports (of core materials) and maintain consistency," he stressed.

Japan is apparently protesting the Moon Jae-in administration's handling of compensation issues related to Japan's brutal colonization of Korea from 1910-45.

South Korea has demanded Japan offer a sincere apology and proper reparation for its sexual enslavement of many Korean women and forced labor against other Koreans during World War II.

The Shinzo Abe administration, however, argues the problem was settled in a 1965 state-to-state treaty to normalize diplomatic ties between the neighboring countries.

South Korea's Supreme Court ruled last year that victims of forced labor have the individual rights to compensation from related Japanese firms. The government repeatedly stated that it "respects" the court decision in accordance with the democratic principle of separation of powers.

Regarding the forced labor issue, South Korea still believes that creating a joint fund by South Korean and Japanese companies to compensate the victims is "the best way," not "the only resolution," according to the official.

"South Korea has an attitude to have diplomatic dialogue, with various methods on the table. The ball has been passed to Japan when it comes to the matter," he said.

He said the mood may change in case of a reshuffling by Japan's Cabinet or an organization change in the ruling party in September.

The enthronement ceremony for Japan's emperor, slated for Oct. 22, may serve as a turning point, he added but pointed out that there should be "sufficient dialogue" between the two sides for a breakthrough ahead of the event.

On the possibility of South Korea dispatching troops to the Strait of Hormuz, he said the U.S. has not made any formal request yet to his understanding.

What's most important, however, is that South Korea can do so at its own discretion, if necessary, in order to protect the property and life of its people and foster national interest.