BEIJING/SEOUL, Aug. 21 (Yonhap) -- The top diplomats of South Korea, China and Japan agreed on the need for trilateral cooperation among their countries despite a rancorous spat between Seoul and Tokyo over trade and history.

South Korean Foreign Minister Kang Kyung-wha and her Chinese and Japanese counterparts, Wang Yi and Taro Kono, held a three-way meeting in Beijing, the first such gathering since August 2016.

"Cooperation among the three countries should proceed without wavering and being influenced by the bilateral relations," Kang said during the talks. "It should contribute to peace on the Korean Peninsula and a strengthening of free trade."

"The three countries have achieved prosperity based on multilateral trade, which is based on norms, and free and fair," she said. "We expect such cooperation based on principles of free (trade)." 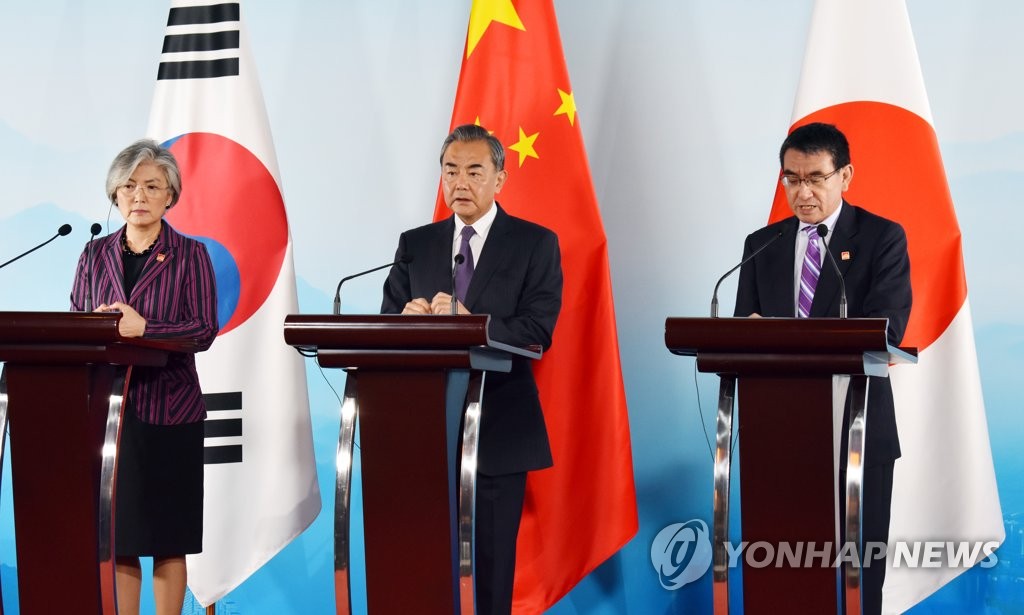 Wang stressed that the three countries should address their issues in a "constructive manner" through dialogue and cooperation.

"Cooperation among the three countries contributed to the development of the world. ... Trilateral cooperation must be based on trust and cooperation, and we need to advance candid dialogue and trust," he said.

Wang also pointed out that bilateral conflicts should not affect trilateral cooperation.

During a photo session, Wang was seen pulling the hands of Kang and Kono to bring them closer together in an apparent move to help defuse tensions at least between the two ministers.

The relations between Seoul and Tokyo have been deteriorating as Tokyo imposed tighter curbs on exports to South Korea of three key industrial materials last month and decided this month to strip Seoul of preferential trade status.

Kono echoed the remarks by Kang and Wang.

Speaking of the United States' plan for its intermediate-range missiles, Wang reiterated his country's strong opposition to either South Korea or Japan possibly playing host to such weapons systems, saying Beijing wants to guarantee the security and stability of the region in cooperation with Seoul and Tokyo.

Washington has pledged to deploy the missiles around the world, including Asia, to maintain deterrence after withdrawing from the Intermediate-Range Nuclear Forces (INF) treaty, an anti-missile treaty with Russia, earlier this month.

The trilateral talks were held to discuss ways to make progress in three-way cooperation and discuss a range of regional and international issues, likely including the ongoing Korean peace process.