Moon received the credentials of envoys from Singapore, the Philippines, Brunei, Colombia, Bulgaria and Nicaragua during ceremonies held at the presidential office Cheong Wa Dae, according to a press release.

Expressing gratitude for their countries' support for peace on the Korean Peninsula, the chief executive asked for their continued backing for the successful implementation of the peace process and voiced hope for enhanced exchanges and cooperation in diverse fields, according to his office.

During the official ceremonies, the diplomats from Colombia and Nicaragua asked Moon to visit their respective nations. Moon, in response, thanked them for the invitation and asked for discussions on the matter with the foreign ministry, it added. 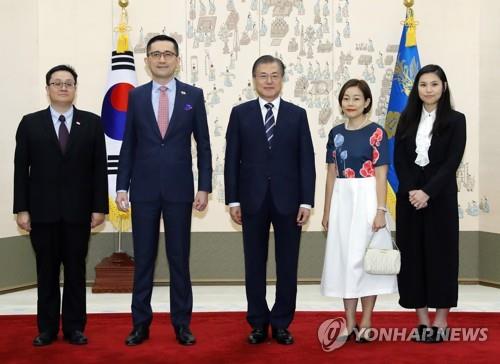