LOS ANGELES, Aug. 21 (Yonhap) -- "Pansori," a Korean traditional solo opera accompanied simply by a drum, has since the era of Korea's last kingdom of Joseon conveyed stories of essential life lessons through its often humorous and satirical storytelling.

There are five surviving pansori stories to date, and one of them, "Heungbuga," or "The Song of Heungbu," will hit the Wilshire Ebell Theatre in Los Angeles on Sunday through the voice of Ahn Sook-sun, a Korean virtuoso traditional singer recognized as one of South Korea's Living National Treasures.

There, Ahn will stage all of Heungbuga's five acts at one sweep, walking the audience through the poor but good-natured Heungbu's eviction from his home by his greedy elder brother, his good-willed rescue of a troubled swallow who helps him win a fortune and his final reconciliation with his brother after the latter falls into poverty.

"If you listen to the work with the knowledge of the full story, it will double the delight," Ahn said in a media interview in Los Angeles on Wednesday (U.S. time).

In efforts to help non-Korean speakers fully grasp the storyline, she recently went out of her way to provide subtitles for her overseas performances, and it proved to be a breakout hit.

"Since providing subtitles, I saw (foreign) spectators erupt in tears or laugh as the story goes ... I think they began to understand the condensed musicality and acting pansori carries," according to the singer. 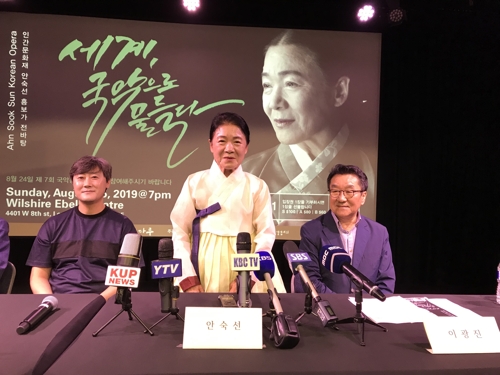 Having professionally staged pansori since her teens, the 69-year-old artist touted pansori as an artistic genre that embodies human virtue and philosophy.

"The five surviving pansori works, including 'Heungbuga,' carry the virtues that people have to champion as they live on. ... It's like a statement by a philosopher by which you are struck with enlightenment and find an important life lesson," she noted, adding, "You may find delight, rage, sorrow and happiness all at the same time in the upcoming performance."

LA was one of the few foreign cities the Korean traditional singer performed in most frequently in her heyday although Ahn said she hasn't been able to come lately due to her current focus on teaching.

"I really came frequently to LA at one time ... I am overjoyous to meet pansori fans in LA again," she said, adding, "I hope I can fully execute every part of ('Heungbuga') as much as my physical strength allows."

Its organizer, Acom, arranged the event as part of its campaign to promote Korean traditional music outside of the home country and provides one free ticket for the purchase of every ticket. 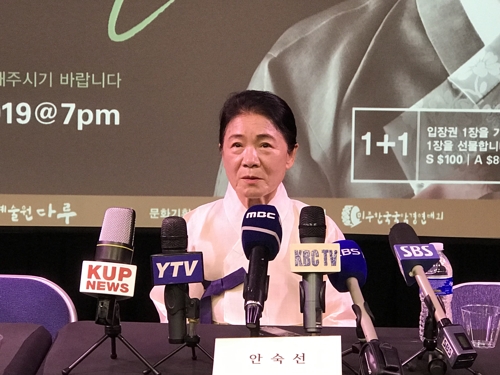