The Supreme Court will decide on Aug. 29 whether to uphold or dismiss a lower court's ruling that sentenced Park to 25 years in prison in the corruption case that led to her removal from office in March 2017.

The appeals court also handed down a prison sentence of 20 years to her longtime confidante Choi Soon-sil in August 2018.

Park was charged for conspiring with Choi into forcing big conglomerates, including top conglomerate Samsung Group, to donate 77.4 billion won to two foundations under Choi's control.

In a separate ruling, Lee was sentenced to five years in jail for bribery by a local court. In February, however, the heir apparent of Samsung Group was released after an appeals court cut the jail term to two years and six months, with the execution of the sentence suspended for four years. It dismissed most of the key charges against him. 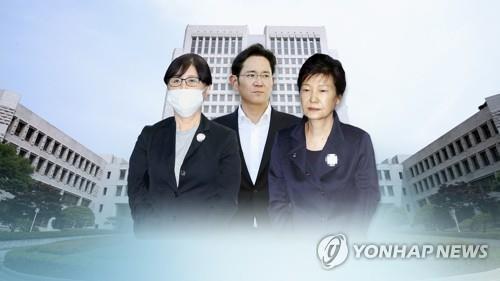