SEOUL, Aug. 23 (Yonhap) -- The troubled Justice Minister nominee Cho Kuk said Friday he will make a social donation with an equity fund and a private school foundation, both of which are implicated in corruption allegations involving his family.

In an apparent bid to allay negative public sentiment, Cho said he will donate to society the private equity fund (PEF) in which his family has made hefty investments and hand over the operation of the school foundation that his family runs.

"This is not aimed at temporarily avoiding the people's harsh criticism but came out of my sincere heart. It is a decision that my family and I have made after thinking deeply about it," Cho told reporters.

The announcement came as public uproar mounted over his qualifications amid a series of scandals ranging from illicit college admission allegations about Cho's daughter and his dubious investment in a PEF to other corruption allegations.

Cho faces suspicions that his family had promised to invest 7.4 billion won (US$6.1 million) in the PEF, the amount that is far larger than its total wealth. The move spawns speculation that it may intend to evade the gift tax and his relative was involved in the operation of the fund.

The private school foundation that his mother runs is also under fire over suspicions that it may be used as the means to augment assets.

Cho said he will donate the PEF to help the underprivileged and let the school foundation be run by the state or a public foundation. 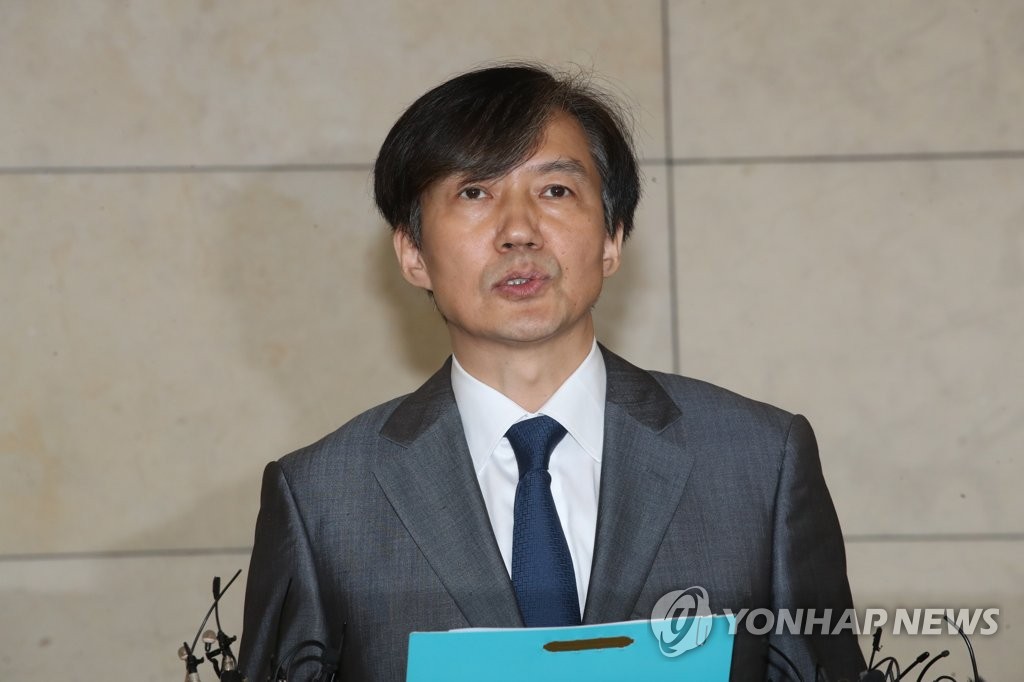 Since the nomination, public anger at his "hypocritical" behavior has increased as Cho, a reform-minded law professor, has called for the need to eradicate social ills committed by the privileged.

In particular, the allegations linked to Cho's daughter have hit a public nerve in a country where college admission is a sensitive issue.

She also received scholarships worth 12 million won at a medical school in 2016-2018 though she flunked twice.

The scandals have emerged as a key political issue that looks set to sway public sentiment ahead of next year's general elections.

President Moon's approval rating dipped to 45 percent this week, down 2 percentage points from two weeks ago, a poll showed.

Negative assessments of his job performance have topped positive ones for the first time in 14 weeks, apparently due to the allegations against Cho.

The announcement also came hours after the ruling party called for his sincere apology to the public, in a turnaround from its previous position defending him.

Lee Hae-chan, the chief of the ruling Democratic Party (DP), said Cho needs to sincerely apologize to the public at a confirmation hearing over the scandals.

"It is important for Cho to frankly apologize for what has driven the public anger during a confirmation hearing. It is critical for him to clarify details of the allegations and humbly accept the public judgment," Lee told a press conference.

A row surrounding Cho's corruption scandals has shown no signs of easing, prompting political parties to wrangle over the date of a parliamentary confirmation hearing.

The DP insists the hearing should be held by a legal deadline that falls on Aug. 30. But conservative opposition parties spurn the ruling party's call.

But the DP chief dismissed the idea as a political gambit, adding that even a hearing for the prime minister is being held for two days.

Meanwhile, Cho has rejected demands by opposition parties to step down, saying he will address all allegations at a confirmation hearing.

To clarify the allegations involving his family, the nominee said he is open to attending a "public" confirmation hearing that would involve the participation of people.

The DP is considering such a format to allow Cho to speak about his allegations to the people to brace for a possible failure to reach a partisan deal on a parliamentary confirmation hearing.

"As minister nominee, I am open to any kind of the verification process. I will answer everything if a public hearing will be opened," he said.

A confirmation hearing is widely seen as a formality, as the formal appointment of a minister-level official does not require approval from the National Assembly. President Moon Jae-in has appointed 16 ministerial-level officials so far without parliamentary consent.

Students of Seoul National University (SNU) and Korea University held candlelight and flashlight vigils on their campuses and expressed anger over the illegal college admission allegations surrounding his daughter. Cho is a law professor at SNU.

They called for Cho and the government to reveal the truth about all suspicions raised.

Kim Da-min, vice president of SNU's student council, told the vigil that Cho needs to step down from being nominee for the high public office and show he is taking responsibility for the uproar. 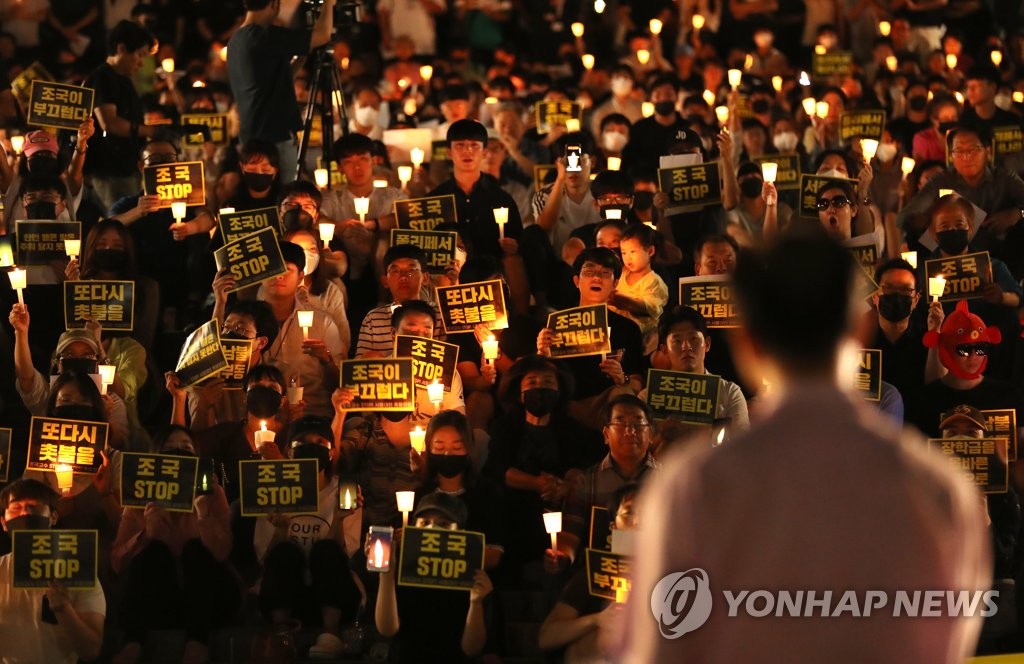