SEOUL, Aug. 23 (Yonhap) -- Negative assessments of President Moon Jae-in's job performance have surpassed positive assessments for the first time in 14 weeks, apparently due to mounting corruption allegations involving the family of his justice minister nominee, according to a Gallup Korea poll released Friday.

In the poll of 1,002 adults nationwide conducted by Gallup Korea from Tuesday to Thursday, Moon's approval rating fell to 45 percent, down two percentage points from two weeks ago.

The disapproval rating of Moon's job performance, on the other hand, rose six percentage points to 49 percent, the pollster noted.

It is the first time since the third week of May that the president's disapproval rating is higher than his approval rating. At that time, 47 percent disapproved of Moon, compared with approvals by 44 percent. 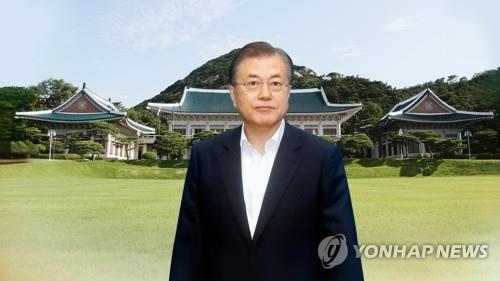 "The issue of personnel management has not ranked high among the reasons of negative assessments of Moon for a long time. The change seems to reflect the escalating controversy over Justice Minister nominee Cho Kuk," Gallup Korea said.