SEOUL, Aug. 23 (Yonhap) -- South Korea consulted with the United States often and adequately on the fate of a bilateral pact with Japan on sharing military intelligence, Cheong Wa Dae said Friday, as Washington has voiced "strong concern" and "disappointment" over Seoul's decision to discard the key tool for strengthening trilateral security cooperation in Northeast Asia.

"It's true that the U.S. hoped for the extension of the General Security of Military Information Agreement (GSOMIA)," South Korea's Deputy National Security Adviser Kim Hyun-chong said in a press briefing.

Thus, he added, it was "natural" for Washington to be disappointed with Seoul's move, which represents its toughest countermeasure yet against Tokyo's export curbs. 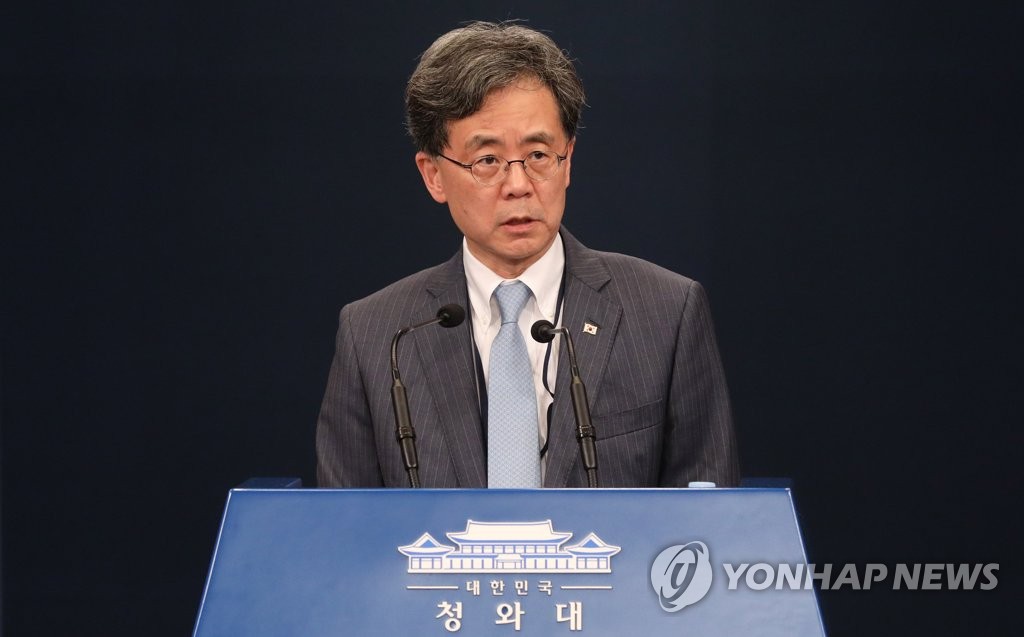 "The South Korean government maintained close communications with the United States in the course of reviewing the conflict with Japan as well as GSOMIA," he said.

In July and August, the NSCs of the two sides discussed the GSOMIA issue nine times by telephone, he stressed.

Announcing the plan to terminate GSOMIA a day earlier, a Cheong Wa Dae official told reporters that the U.S. "understands" South Korea's position on the basis of bilateral consultations via various diplomatic channels.

The Pentagon, however, issued a statement expressing its "strong concern and disappointment that the Moon (Jae-in) administration has withheld its renewal" of the accord.

"We strongly believe that the integrity of our mutual defense and security ties must persist despite frictions in other areas," Lt. Col. Dave Eastburn, a Pentagon spokesman, said.

On a trip to Canada, Secretary of State Mike Pompeo also said, "We're disappointed to see the decision the South Koreans made about that information-sharing agreement."

The U.S. response added to worries about the potential negative impact to the Seoul-Washington alliance from the planned termination of GSOMIA, signed in 2016.

Even if the pact expires, South Korea will continue sharing such information with Japan, if necessary, via the Trilateral Information Sharing Arrangement (TISA), under which the U.S. will serve as the intermediary, according to Kim.

He said it may become a chance for South Korea to advance its alliance with the U.S.

"Our government will work to ensure that the latest decision will serve to not weaken the alliance, but actually upgrade the alliance so that it becomes even more solid," he said.

He cited Seoul's plans to beef up its own defense capabilities through an increase in the defense budget and the acquisition of strategic assets, including military satellites.

The introduction of a light aircraft carrier can be an option as well, he said.

As South Korea's military has no spy satellite yet, it has provided the U.S. and Japan largely with "human intelligence" on North Korea.

"If we strengthen our capabilities for independent intelligence-gathering and analysis, defense power, not relying on Japan (for satellite-based information), the ally will depend more on us," Kim said.

Kim, meanwhile, said chances are slim that his government will reconsider the decision to ditch the GSOMIA with Japan.