SEOUL, Aug. 23 (Yonhap) -- South Korea got the better of Thailand at the continental women's volleyball tournament on Friday, avenging a loss from last year's Asian Games.

South Korea had fallen to Thailand in the semifinals of the Asian Games in Jakarta last August, getting denied in its bid for a second straight gold medal. 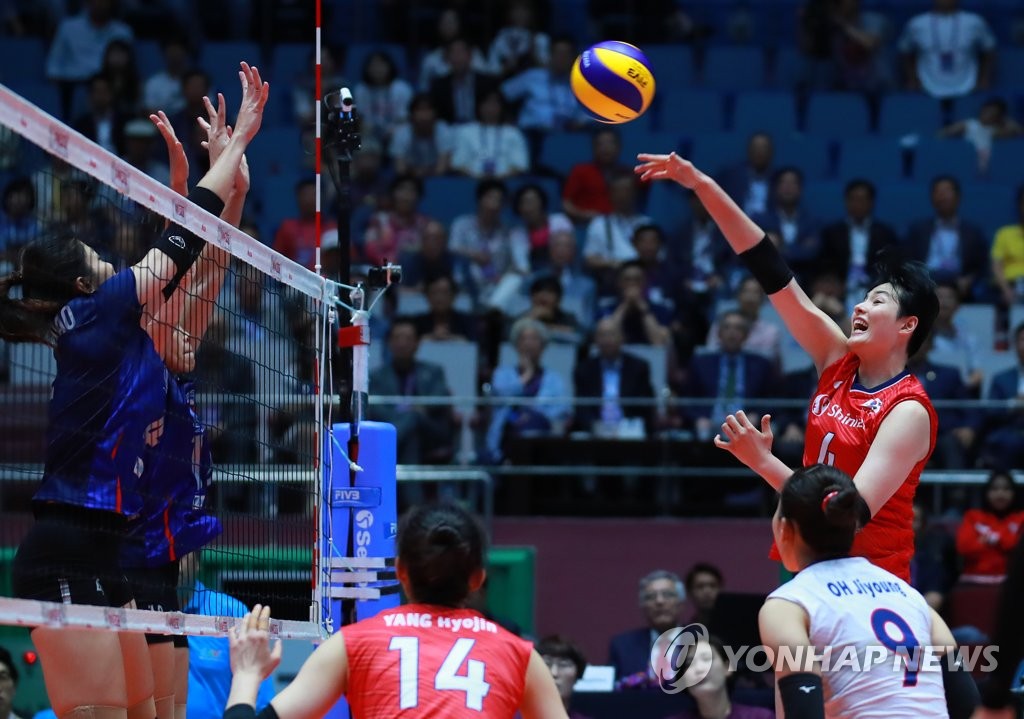 South Korean opposite spiker Kim Hee-jin led all players with 26 points, while Kim Yeon-koung and Lee Jae-yeong each had 19 points. Middle blocker Yang Hyo-jin recorded a team-high seven blocks as part of her 12 points.

South Korea had 18 blocks in total, compared to just four by Thailand.

This was the last match in the second round for South Korea and Thailand, both of whom had already clinched a spot in the semifinals with victories on Thursday.

Only the seeding was left to be determined, with Friday's winner to take the top seed out of Pool E and the loser taking the second seed.

In the crossover semifinals, the top Pool E team will face the Pool F runner-up, while the No. 2 seed from Pool E will take on the Pool F winner.

China and Japan will vie for the top Pool F spot later Friday. South Korea and Thailand will meet again in the final on Sunday if both win their respective semifinal matches. 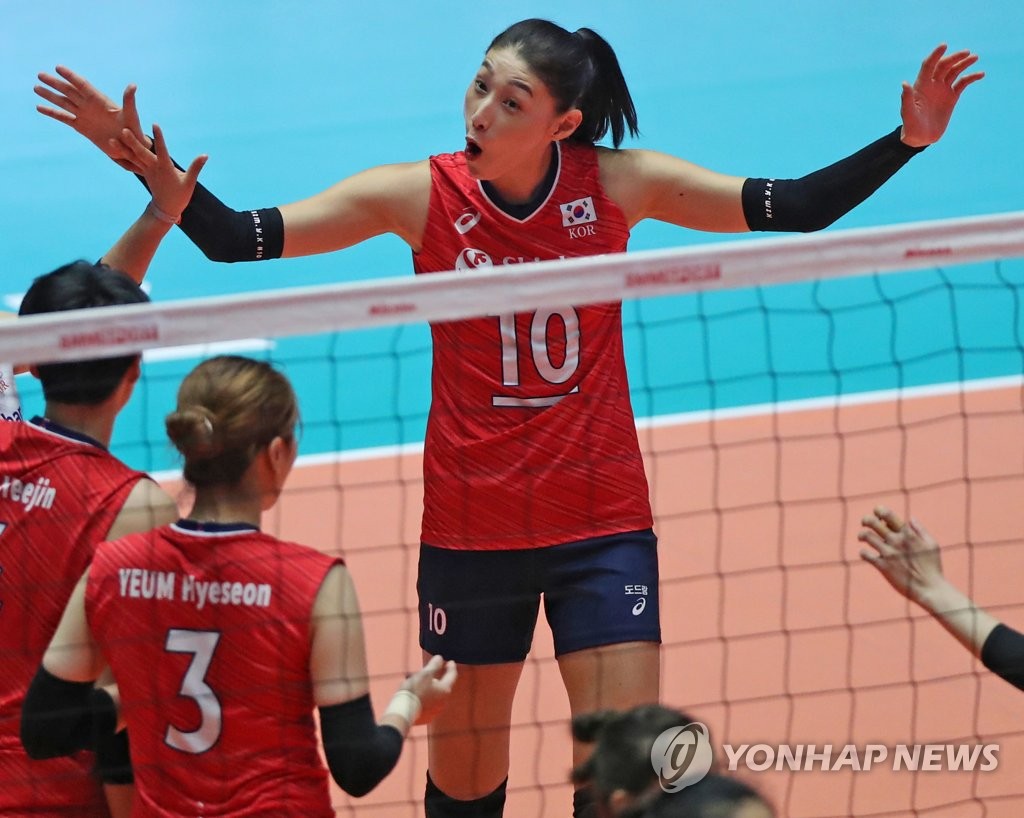 The South Korea-Thailand showdown was a prelude to the Asian Olympic qualifying tournament scheduled for January 2020. By virtue of reaching the second round here, both countries will be at the regional Olympic qualifiers and will vie for one spot up for grabs.

Two of the top-ranked Asian nations, China and Japan, have already secured their spots at the Tokyo Olympics. China did so by winning its group at the intercontinental event earlier this month, while Japan will get in as the host nation.

Against Thailand, South Korea took the back-and-forth first set 25-20. Wing spiker Kim Yeon-koung, the team's captain and its most dangerous attacker, wasn't the focal point of the offense early on, and opposite spiker Kim Hee-jin carried the load with a series of kills and blocks. With a slim lead at 14-13, South Korea picked up five straight points for some breathing room and held off a late Thai charge to close out the frame.

Kim Yeon-koung announced her presence early in the second set and helped stake South Korea to a 7-2 lead.

But the advantage evaporated in a hurry. Down 10-5, Thailand went on a 9-1 run for a 14-11 lead. South Korea had no answer to the brilliance of veteran setter Nootsara Tomkom, who created quick attack opportunities that left the opponents flustered.

South Korea blinked first. With her team trailing 21-20, Kim Yeon-koung had her spike blocked and allowed Thailand to go up by two. Kim got one back with a spike on the next possession, but her next attempt went long as Thailand went back up by two at 23-21. Kim's heroics weren't enough, and Thailand closed out the set 25-23.

It was the first set South Korea dropped all tournament. 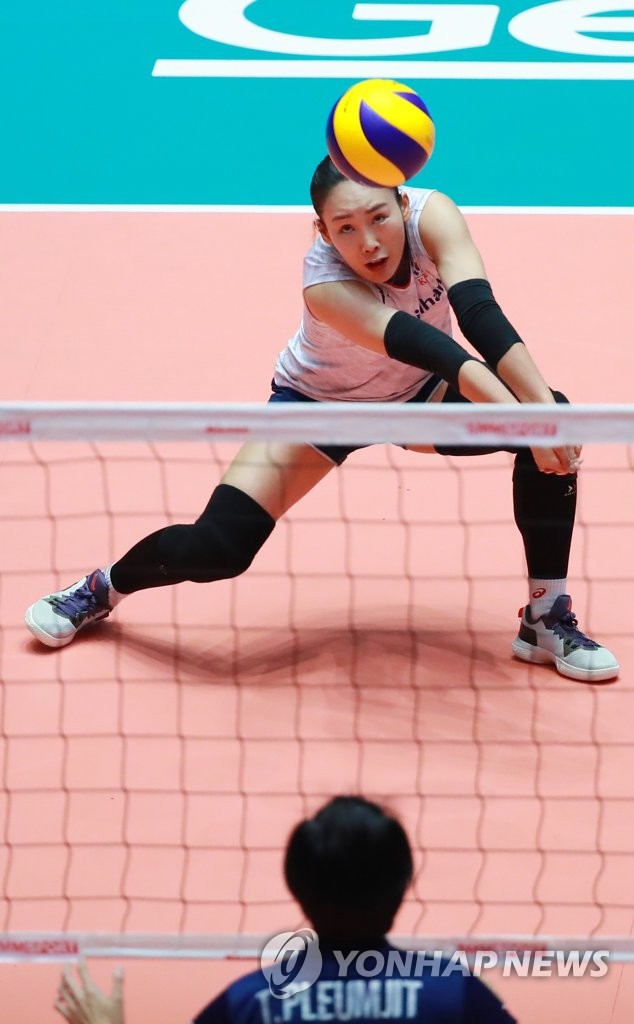 The match remained tight early in the third set. Then leading 11-8, South Korea opened things up with six straight points, with a combination of kills by Kim Yeon-koung and Kim Hee-jin and a couple of aces by Lee Jae-yeong. Kim Yeon-koung and Yang Hyo-jin contributed blocks during that run, too.

Thailand tried to fight back but never got to within fewer than seven points. A spike by Lee Jae-yeong and a block by Kim Hee-jin gave South Korea the third set at 25-17.

The fourth set was tighter, with neither team leading by more than three points until South Korea went up 10-6. From there, Thailand responded with three straight points.

It was South Korea's turn to go on a run with five unanswered points. Kim Hee-jin was all over the court, hitting a powerful spike in one possession and then blocking a Thai attempt the next.

South Korea went up 20-16, before Thailand clawed back to knot the score at 21-21, with Chatchuon Moksri coming through with a spike and a block during the late charge.

South Korea finally closed out Thailand with four straight points. Pyo Seung-joo came off the bench with a key spike and a serve ace to set up match point, and Yang Hyo-jin's block sealed the victory.