SEOUL, Aug. 24 (Yonhap) -- Host South Korea lost to Japan in the semifinals of the Asian Women's Volleyball Championship on Saturday, coming up short in a bid to claim its first continental title on home court.

Japan rallied after dropping the first set for a 3-1 (22-25, 25-23, 26-24, 28-26) victory at Jamsil Arena in Seoul and moved on to Sunday's final. It will face the winner of the other semifinal clash between Thailand and China, scheduled for later Saturday. 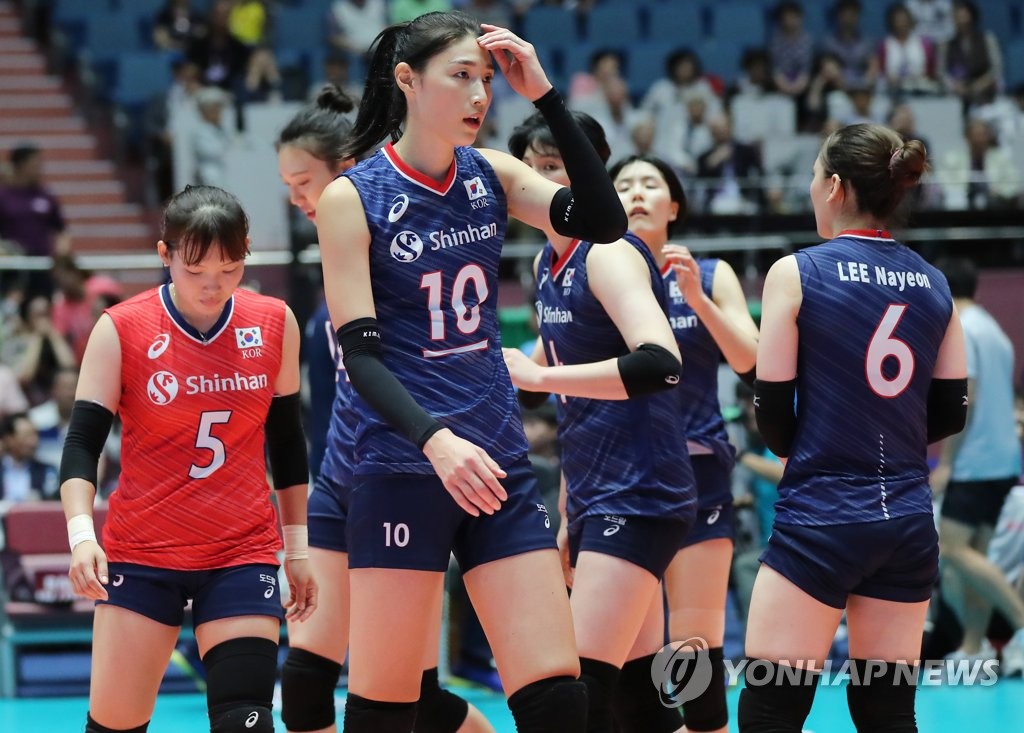 The loser of that match will take on South Korea in the third place match at 1:30 p.m. Sunday.

South Korea has never won the biennial Asian championship, which began in 1975. It has had seven runner-up finishes.

The drought will continue for at least another two years, as South Korea blew leads in both the third and fourth sets to gift wrap the match for Japan, which brought a team of 10 teenagers who were part of the under-20 world championships winning squad.

Mayu Ishikawa, a 19-year-old MVP of that under-20 tournament in July this year, led her team with 30 points. Four other players scored in double figures, including 18-year-old Haruna Soga with 13.

Kim Yeon-koung also had 30 for South Korea, while Lee Jae-yeong added 20 in the losing cause. No one else had more than nine.

South Korea rallied from a 16-11 deficit to take the hard-fought first set at 25-22. At 19-19, South Korea went ahead with a Japanese turnover, and kills by Lee Jae-yeong and Kim Yeon-koung helped stake South Korea to a 22-20 lead. Kim, South Korea's captain and its most dangerous attacker, finished off the set with a spike.

South Korea once again found itself trailing midway through the second set, and there was no rally this time. 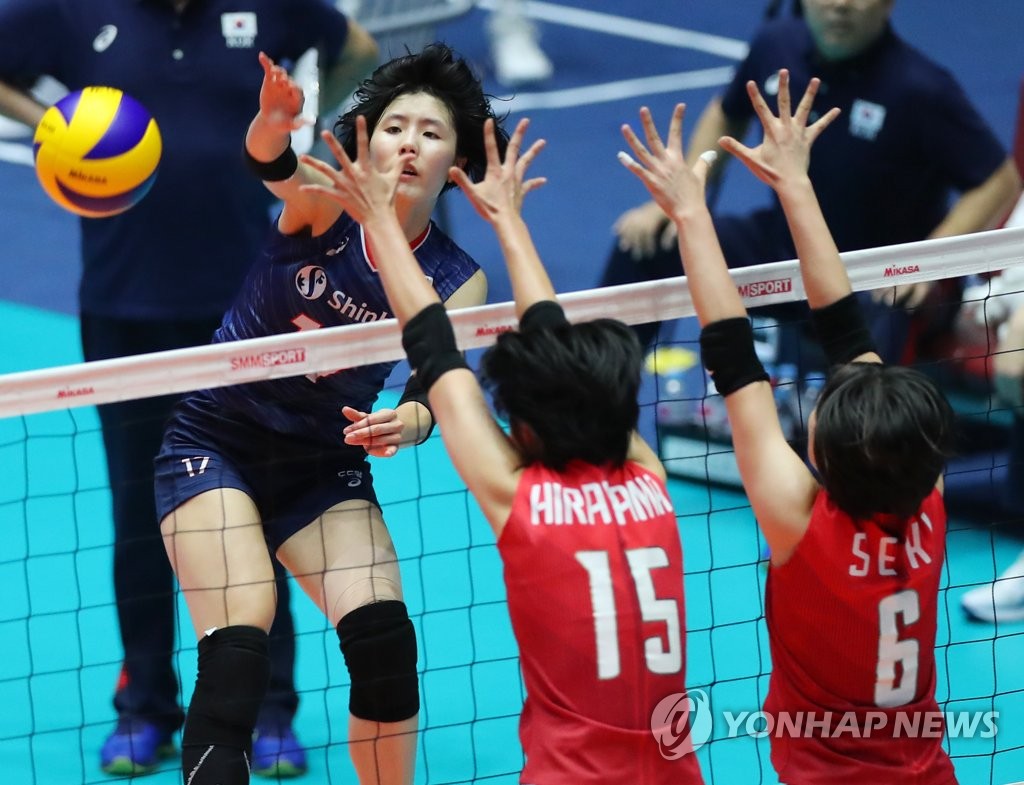 Down 22-16, South Korea scored four consecutive points to put pressure on Japan. But with a 23-22 lead for Japan, Haruna Soga's kill nudged her team ahead. South Korea got a point back, but Mayu Ishikawa closed out the set with a spike.

It was Japan's turn to come back from a deficit in the third set. South Korea led 16-13, but Ishikawa, Tamaki Matsui and Soga made it 16-16.

A seesaw match ensued, but with South Korea down 24-23, Kim Yeon-koung forced a deuce. Japan got the next two points to win the third set, thanks to Shion Hirayama's kill and Kim Hee-jin's spike that went out of bounds on the next possession.

South Korea squandered a 21-17 lead in the fourth set, allowing Japan to tie it up at 21-21. With the score deadlocked at 26, Miwako Osanai and Ishikawa got the next two points for Japan to clinch the victory. 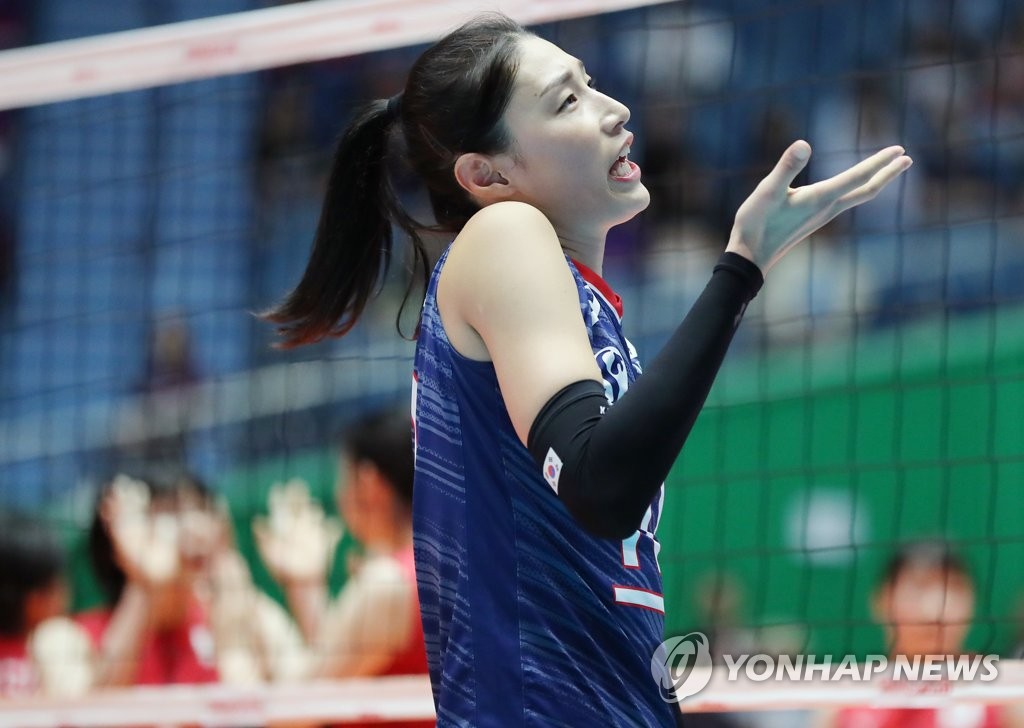 Kim Yeon-koung admitted after the loss that she was "shocked" by the result.

"In the third and fourth sets, we lost our leads, and we were caught off guard by their attacking patterns," the South Korean captain said. "We couldn't execute what we'd prepared."

The Asian championship was supposed to be a tuneup for the Asian Olympic qualifiers scheduled for next January. South Korea and Thailand are expected to compete for one ticket to Tokyo, with two of the best in Asia, China and Japan, having already qualified.

South Korea defeated Thailand in Friday's second-round match to avenge a semifinal loss at the 2018 Asian Games, but whatever positive vibes the team built from that win left the building on Saturday.

"We absolutely want to win the third-place match tomorrow," Kim said. "The qualifying event in January will be really important. I'd like to think that this loss is just a part of our development."