INCHEON, Aug. 24 (Yonhap) -- South Korea lost to Lithuania 86-57 in a tuneup game for the men's basketball world championship on Saturday, unable to match the Europeans' sharp shooting in the second half.

After some sloppy basketball by both teams in the first half, world No. 6 Lithuania blew 32nd-ranked South Korea off the floor over the last two quarters to start a four-nation tournament at Samsan World Gymnasium in Incheon, 40 kilometers west of Seoul.

Lithuania drained eight three-pointers in the second half, after making just one from six attempts in the first half. 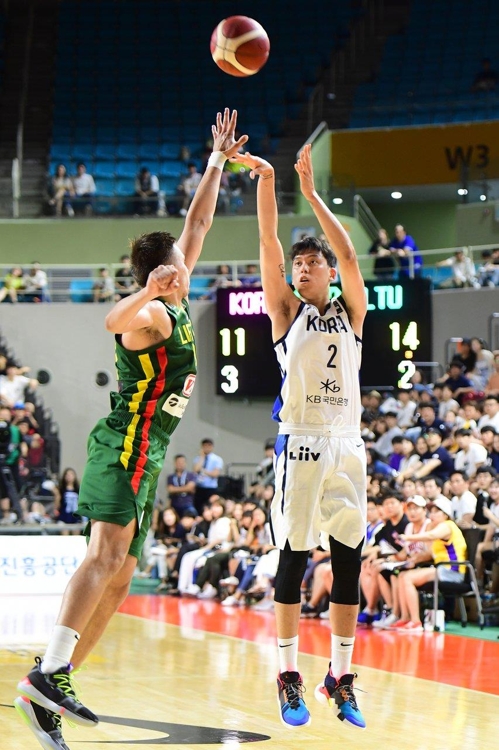 South Korea is hosting the four-day tournament in preparation for the FIBA Basketball World Cup, scheduled to run from Aug. 31 to Sept. 15 in China.

South Korea will next play the Czech Republic at 3 p.m. Sunday, and then Angola at 3:30 p.m. on Tuesday. All four countries here will compete at the FIBA World Cup.

For Lithuania, Domantas Sabonis of the Indiana Pacers was sidelined with an illness, but South Korea was still overmatched.

South Korea shot just 6-of-20 from the field in the opening quarter and trailed 21-13. But it got three quick buckets to start the second quarter to cut the deficit to 21-19. But Lithuania responded with a 9-2 run for a 30-23 lead, with Jonas Valanciunas, the 7-foot center for the Memphis Grizzlies, contributing seven points.

South Korea clamped down on defense to hold Lithuania to just four points the rest of the quarter and closed out the half down 34-27.

With Lithuania up 41-36, Lukas Lekavicius and Mindaugas Kuzminskas made back-to-back three-pointers, both shots set up by Valanciunas when he was double-teamed in the low post.

Naturalized South Korean center Ricardo Ratliffe committed his fourth foul with 4:08 remaining in the third and had to leave the floor with a team-high 16 points. 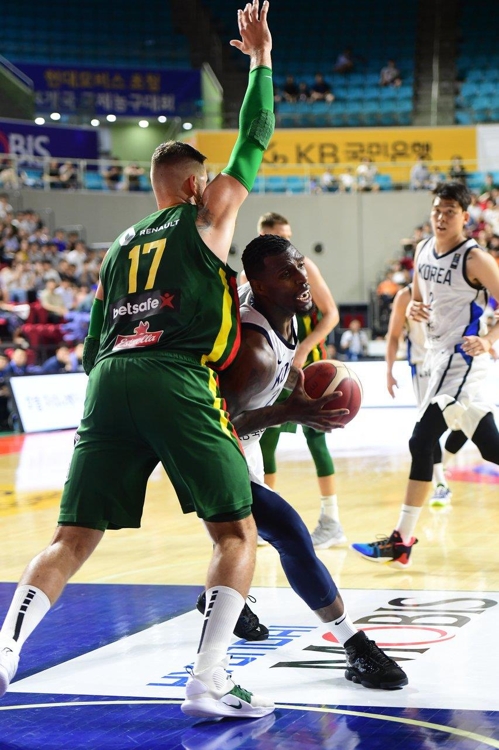 It opened up the floor for Lithuania down low. At the other end, Lee Seoung-hyun made South Korea's first three-pointer of the game with 2:35 left in the third quarter, cutting the deficit to 52-45. But it was the last basket of the quarter for South Korea, and Lithuania got the last nine points of the frame, including a three by Rokas Giedraitis at the end.

Giedraitis dropped two more bombs from distance to start the fourth quarter and staked Lithuania to a 67-47 lead. Lekavicius joined the party with a three-pointer of his own and effectively put the game out of reach of the South Koreans.

Valanciunas had a field day down low in the fourth quarter, with his primary defender, Ratliffe, playing with four fouls. The Lithuanian center scored nine straight points in one stretch on easy layups, putbacks and dunks midway through the final quarter, giving his side a 78-52 advantage.

From there, it was cruise control for Lithuania. The Basketball World Cup will double as qualification for the 2020 Tokyo Olympics. The top team from Asia, other than the Olympic host Japan, will punch its ticket to Tokyo.

South Korea will contend with China, Iran, Jordan and the Philippines for the Olympic spot. South Korea last qualified for an Olympic men's basketball tournament in 1996.