SEJONG, Aug. 26 (Yonhap) -- South Korea's finance minister said Monday the country will implement a "greater and aggressive" fiscal policy next year to deal with a series of economic headwinds, such as an escalating trade row between the United States and China, and another trade tussle with Japan.

Hong Nam-ki, the minister of economy and finance, said the government has drafted an expansionary budget next year, although a temporary fiscal deficit is likely.

"An aggressive fiscal role is more important than ever before," Hong said in a meeting with lawmakers of the ruling Democratic Party for consultations on next year's budget before submitting it to the parliament next month for approval. 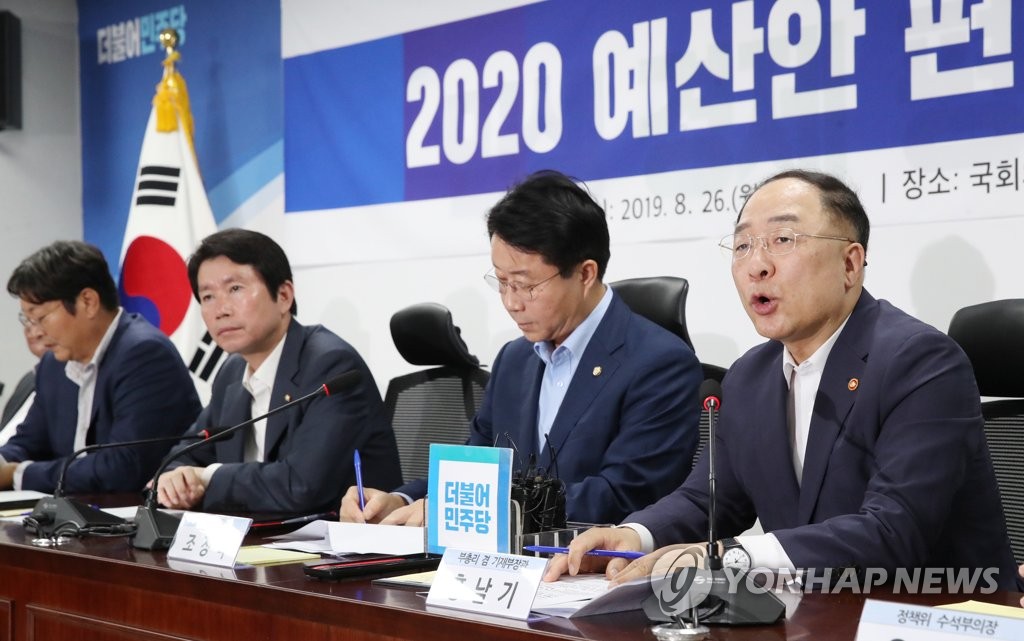 The draft budget, if passed by the National Assembly, would raise South Korea's national debt to the upper end of 39 percent of its gross domestic product in 2020, compared with 37.2 percent in 2019.

The move comes amid concerns that trade frictions between the United States and China, along with Japan's expanded trade restrictions against South Korea, could further weigh on the South Korean economy already grappling with slowing exports and weak domestic demand.

South Korea's exports have been on a steady decline since December last year, again falling 13.3 percent in the first 20 days of August from the same period last year.

But the finance minister said it would not be easy to attain the growth target given the escalating trade tensions.

Kim Yong-beom, vice minister of economy and finance, said South Korea's financial markets could be influenced temporarily by global risks, such as Japan's trade curbs and the protracted Sino-U.S. trade dispute, as well as uncertainty over a U.S. rate cut.

South Korea depends heavily on exports and foreign capital investment, a situation that makes it vulnerable to external shocks.

South Korea's foreign currency reserves came to $403.11 billion as of end-July, up $40 million from the previous month, according to the Bank of Korea.

Fitch's rating for Asia's fourth-largest economy has been AA-, the fourth-highest level on its sovereign ratings table, since 2012, when the rating agency upgraded it from A+.

(LEAD) Seoul to max out fiscal easing next year: minister

(LEAD) Seoul to max out fiscal easing next year: minister