During the Group of Seven summit in France on Sunday, Trump also told reporters that Pyongyang's projectile launches do not represent a breach of his agreement with North Korean leader Kim Jong-un that involves nuclear and longer-range ballistic missile tests.

Pyongyang tested what it claims to be a "new" super-large multiple rocket launch system Saturday -- the first such projectile launch since the allied exercise ended Tuesday, and the seventh since July 25 when the North started firing missiles and projectiles in protest in the runup to the exercise.

"I'm not happy about it. But again, he's not in violation of an agreement," Trump said before his bilateral talks with Japanese Prime Minister Shinzo Abe on the sidelines of the G-7 summit in Biarritz, according to a transcript released by the White House.

"I received a very nice letter from him last week. We speak. He was upset that South Korea was doing the 'war games,' as you call them. I don't think they were necessary either, if you want to know the truth," he added. 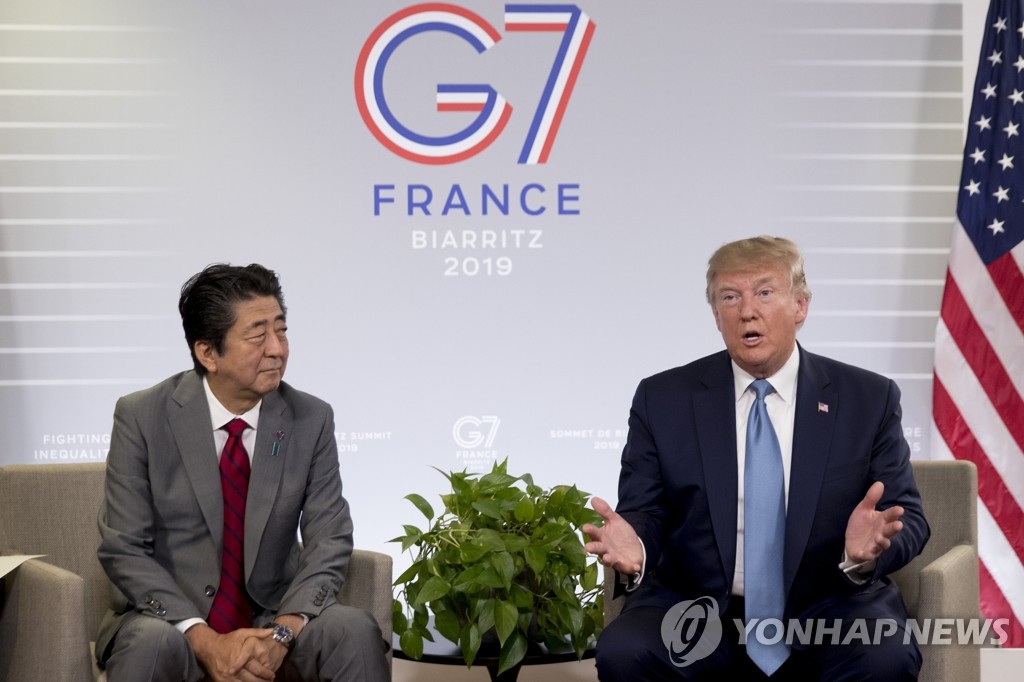 Pyongyang denounced the Seoul-Washington exercise as a rehearsal for invasion and a sign of continued hostility toward it, although the allies apparently scaled down the exercise and conducted it in a relatively low-key manner to support diplomacy with the North.

Commenting on the "modified" version of the combined exercise, Trump showed a negative stance on such military drills.

"I said that to all of my people. I said, 'I don't want to interfere because I think if you want to do them, you can do them, if you think it's necessary. But I think it's a total waste of money,'" he said.

Trump went on to say, "I think it was unnecessary to do, frankly."

Abe's threat perception appears much more serious than that of Trump.

"Our position is very clear: That the launch of short-range ballistic missiles by North Korea clearly violates the relevant U.N. Security Council resolutions," Abe said through an interpreter at the press availability with Trump.

"So, in that sense, it was extremely regrettable for us to experience another round of the launch of the short-range ballistic missiles by North Korea in recent days," he added.

Trump's apparent focus on coping with threats from Pyongyang's intercontinental ballistic missiles capable of carrying nuclear warheads has created an impression that the U.S. pays insufficient attention to the North's shorter-range missiles, long a source of threats to America's Asian allies.