SEOUL, Aug. 26 (Yonhap) -- Arming with the right technology and data is critical for survival in the digital age, and that's why more Korean companies are scurrying to shift their IT portfolio to cloud computing space to meet a new set of business demands and bring innovation quickly.

Cloud computing allows companies to put servers, databases and applications in virtual environments where they can be accessed remotely from anywhere at any time, without requiring data centers of their own.

In a nutshell, a key draw of cloud computing for businesses is that it reduces costs, increases workload flexibility and speeds up the delivery of new applications across enterprises.

"Thanks to the advances in communications technology, virtual servers are accessible via the internet, allowing companies to store data online and freely use IT related services," Kim Su-jin, a tech analyst at Mirae Asset Daewoo, said. "Cloud computing is changing the ecosystem of the global software industry and opening up new business opportunities."

According to market researcher Gartner, the global cloud market is estimated at US$206.2 billion in 2019, a 17.3 percent hike from a year earlier. The domestic cloud industry is valued at $1.9 billion this year, with its compound annual growth rate expected to reach 19 percent by 2022, it noted.

Cloud has emerged as one of the key infrastructures for the Fourth Industrial Revolution currently underway, with Korean enterprises across sectors ratcheting up drives to migrate their IT systems to cloud platforms.

Samsung Group, South Korea's largest conglomerate, has been shifting its IT system to cloud to turn dispersed information across its affiliates into useful big data and create more business opportunities.

For that goal, Samsung SDS Co., an IT subsidiary of Samsung Electronics Co., said it completed about 90 percent of the process of migrating the IT system of its sister companies whose business portfolios range from manufacturing to finances last year. 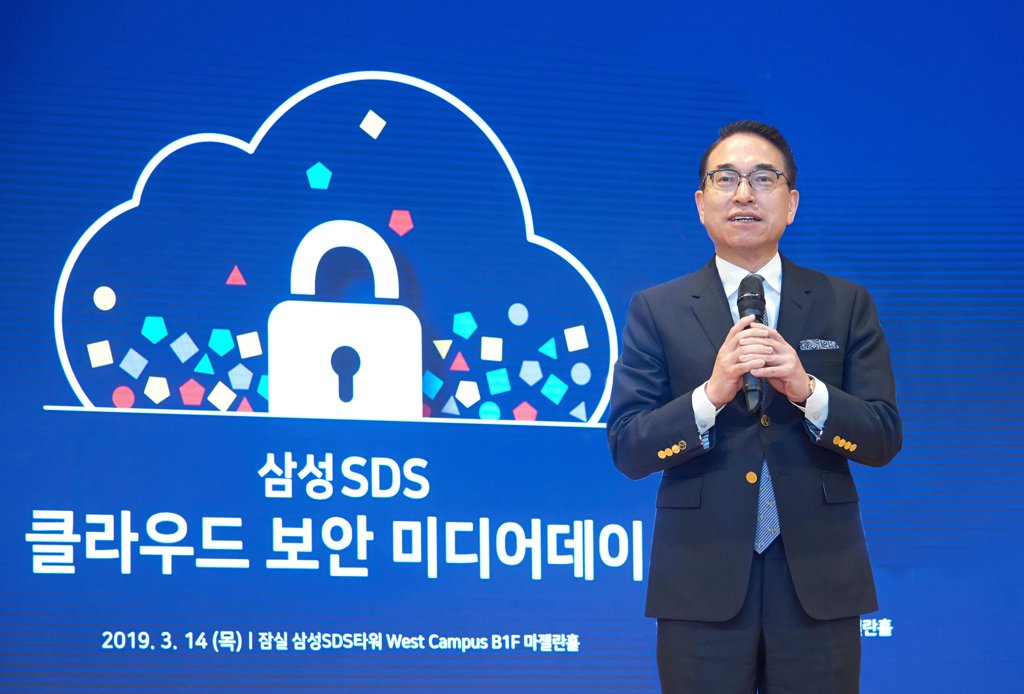 Samsung SDS, which operates five data centers in the nation, said it offers a hybrid cloud model, a mix of a private cloud of its own and private cloud services by global leaders, including Amazon Web Services (AWS) and Microsoft, to meet varying demands of its clients.

"Samsung SDS provides end-to-end cloud services from adoption to operation, while suggesting an effective mid-term road map based on expertise," Samsung SDS said in an emailed statement. "The hybrid cloud model allows companies to monitor their accounts, servers and data storage in multiple cloud platforms and offers pay-as-you go pricing depending on the service."

For example, Samsung Electronics migrated its certification database system, which is needed for verifying accounts when connecting smartphones and household appliances to its digital assistant, and its easy payment system to Amazon Web Services (AWS), Amazon's on-demand cloud platform.

The IT company said it has shortened the migration period from eight weeks to three weeks and reduced input resources by 65 percent by using various automation technologies, including artificial intelligence (AI) and data analysis.

Another conglomerate, LG Group, is also riding the latest digital wave of cloud, led by its IT service subsidiary LG CNS Co.

LG CNS has set a goal of shifting over 90 percent of the workloads of key LG affiliates, including LG Electronics Inc., LG Chem Ltd. and LG Display Co., to cloud by 2023.

The company said migrating IT portfolios to the cloud is only the beginning of what's possible, arming the business with a continuous stream of new products and services.

"With cloud migration, LG will have an agile business structure that can apply new IT technologies in a broad range of businesses, including research and development, manufacturing and marketing," LG CNS said in a release.

Besides tech and manufacturing sectors, a growing number of logistics companies are embracing the latest IT trend to effectively manage flights, cargo and other systems.

Korean Air Co., the nation's largest airlines, said it will invest 200 billion won ($164.1 million) over the next 10 years to overhaul its entire IT infrastructure.

Under the goal, the full-fledged carrier plans to move all its applications and data in its own data center to AWS cloud, including the entire set of websites, cargo management and flight control systems, over the next three years.

The company said the use of AI and machine learning for big data analysis will help offer customized services by suggesting optimized air packages for passengers based on their past flight histories.

"The government should come up with more proactive cloud computing support measures to prevent the domestic industry from being dominated by global IT companies and help their bid in the overseas market," Son Young-hoa, a professor at Inha University, said.

In response to rising calls, Park Young-sun, Minister of SMEs and Startups, vowed to expand collaboration with the local industry to establish essential IT infrastructure and help local companies arm with the right tools for the digital age.

"The government will establish AI-cloud computing infrastructure for small and medium-sized enterprises to connect factories with the internet and facilitate platform businesses," Park said in a technology forum held in Seoul earlier in the day.