The survey of 501 adults nationwide conducted last Friday by Realmeter found that 54.9 percent favorably evaluated the South Korean government's decision the previous day to terminate GSOMIA with Japan. Of the supporters, 35.3 percent called it a "very good decision," while the remaining 19.6 percent defined it as a good decision.

Realmeter said 38.4 percent of the pollees negatively evaluated the termination of GSOMIA, with 26.4 percent of them calling it a very bad decision. The remaining 6.7 percent didn't respond or said they don't have an opinion. The poll has a margin of error of plus or minus 4.4 percentage points with a confidence level of 95 percent. In a similar Realmeter poll carried out July 30, when Japan was preparing to remove South Korea from a whitelist of countries with preferential trade status, 47 percent supported the termination of GSOMIA, compared with 41.6 percent calling for the renewal of the pact. 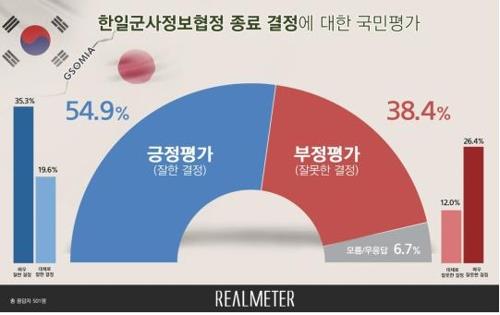 In last week's poll, the termination of GSOMIA with Japan was the majority opinion in all regions, except Daegu and the adjacent North Gyeongsang Province, and among liberals (85.7 percent) and supporters of the ruling Democratic Party (89 percent), Realmeter noted.

By contrast, 59.7 percent of conservatives and 77.4 percent of the supporters of the main opposition Liberty Korea Party were opposed to the Seoul government's decision.

In a separate poll of 1,000 adults nationwide conducted by the vernacular JoongAng Ilbo last Friday and Saturday, 51 percent praised the termination of GSOMIA as a good decision for national interest, while 38.5 percent said the decision could threaten the trilateral security alliance with Japan and the United States.

Over half of Koreans support end of GSOMIA with Japan: poll

Over half of Koreans support end of GSOMIA with Japan: poll