Things appear not to be improving for them.

The benchmark Singapore complex gross refining margin (GRM) for the third week of August reached US$4.1 per barrel, down $3.4 from a year earlier and a $0.8 drop from the previous week. Since reaching this year's high of $7.5 per barrel in the second week of July, the GRM has been falling for six straight weeks.

Margins are the difference between the total value of petroleum products coming out of an oil refinery and the cost of crude and related services, including transportation. Usually, South Korean refiners generate profit if the refining margin stays above at least $4 per barrel.

Analysts pointed out that a drop in international oil prices are also jacking up their inventory losses.

The price of Dubai crude oil stood at $59.43 per barrel as of last Friday, far below its year-high $74 per barrel in April.

Analysts estimated that SK Innovation's third-quarter operating profit will reach around 425 billion won, down 49 percent from a year earlier, while that for S-Oil will plunge 45 percent on-year to 173.3 billion won.

"As refiners resumed operations and increased their production after the maintenance season, refining margins have dropped," said Lee Ji-yeon, an analyst at Shinyoung Securities Co.

"Demand for petrochemical products are improving compared to the second quarter, but due to oversupply concerns, prices of such products are also facing downward pressure."

The weakening Korean won is also another headache for local refiners. For the past few weeks, the local currency stayed over the 1,200 won level against the greenback, sharply down from an average of 1,125 won in the first quarter and 1,169 won in the second quarter.

The currency is widely expected to hover above the threshold for a longer period of time, given a variety of conditions backing the weaker won. The rise in the won-dollar rate pushes up the cost of buying crude.

Industry insiders estimated that SK Innovation's earnings before taxes for the second half are to drop 68.4 billion won if the won sinks by 5 percent against the dollar.

"Given the price drop in naphtha and the weak won, it's not likely that the refiners will have a good performance," said Shon Jin-woo, an analyst at SK Securities Co.

There have been high hopes that the International Maritime Organization (IMO) sulfur limits on marine fuel, which come into effect in January 2020, will help the refiners, but analysts said that demand for the low-sulfur fuel oils will likely appear in September.

"Since it takes about three to four months for shippers to replace their marine fuels, demand for low-sulfur fuel oils will likely start increasing next month," said Jeon Yu-jin, an analyst at Cape Investment & Securities Co. "But with the intensifying U.S.-China trade war, there are few expectations that companies will expand their purchases of oil and petrochemical products." 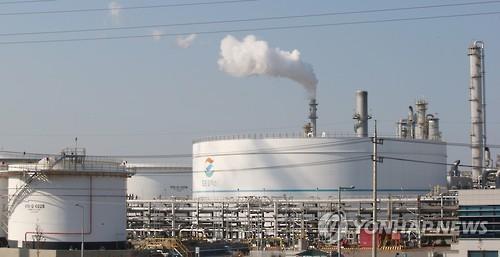