Lee, the de facto head of South Korea's top conglomerate Samsung Group, made the call during a visit to Samsung Display Co.'s factory in Asan, about 100 kilometers south of Seoul.

"Crises and opportunities incessantly repeat themselves. (Samsung Display) should not give up its large display business due to current difficulties facing the liquid crystal display (LCD) sector," the company quoted Lee as telling a meeting with senior executives.

"Greater efforts should be made to develop new technologies in order to play a leading role in the future. Technologies are the only way to survival."

Lee's remarks were seen as highlighting his strong push for the large display business despite the display industry's crisis stemming from plunging prices.

Samsung Display recently began to curtail production of LCDs at the Asan factory in response to worsening profits. 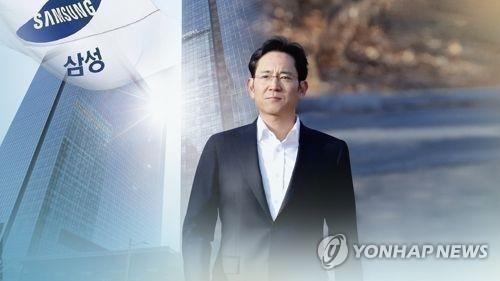 The production cut was also seen as shifting its focus to a hybrid display that uses both organic light-emitting diode (OLED) and quantum dot (QD), known as QD-OLED panels.

Some industry watchers speculated Samsung may soon halt some LCD lines and announce an investment plan for QD-OLED panels to focus on a more profitable segment.

Samsung Display, a leading smartphone OLED panel maker, already uses its QD technology for premium TVs and is well-positioned to develop the new type of display.

Stung by plunging LCD prices, Samsung Display suffered a 61 billion won (US$50.1 million) loss on sales of 11.8 trillion won in the first half of this year.

Samsung Display officials also said Lee was briefed on company measures to cope with Japan's curbs on exports to South Korea of key materials crucial for making chips and displays.

Industry watchers construed Lee's recent factory visits as showing his unwavering determination to brace for the future in the midst of unfavorable conditions for Samsung both at home and abroad.

The visits come as South Korea's top court is scheduled to deliver a final verdict this week on Lee in a massive corruption scandal involving ousted President Park Geun-hye.

The Supreme Court will decide Thursday whether to uphold or dismiss a high court's ruling that freed him from a prison after cutting the jail term to two years and six months with a stay of execution of four years. In August 2017, a lower court sentenced Lee to five years in jail for bribery.
(END)