SEOUL, Aug. 27 (Yonhap) -- South Korea will throw a concert along the heavily fortified Demilitarized Zone next month to celebrate the first anniversary of the Joint Pyongyang Declaration, adopted by the leaders of the two Koreas last year, the culture ministry said Tuesday.

Set for Sept. 9 at Dorasan Station just south of the land border with North Korea, the DMZ Peace Concert, with the theme "Culture Connects," will bring together musicians from many different genres for a joint performance.

The concert was arranged as South Korea is set to mark in September the passage of one year since the adoption of the Joint Pyongyang Declaration. On Sept. 19 last year, President Moon Jae-in and North Korean leader Kim Jong-un signed the declaration in the North Korean capital in recognition of their joint determination to end military hostility across their border and to boost cooperation.

Since then, Seoul has doubled efforts to transform the DMZ and its surrounding areas as a symbol of peace, not aggression, by introducing various cultural projects, including the opening of some of the trails along the southern side of DMZ to the public.

The two-hour concert will feature traditional Korean dances both from the South and North sides of the Korean Peninsula, Yo-Yo Ma's widely acclaimed unaccompanied cello performance, children's songs from the era before the division of the two Koreas, as well as a piano performance by Kim Cheol-woong, a North Korean pianist who defected to South Korea.

The audience will consist of South Koreans whose hometowns are in the North, North Korean defectors, Korean War veterans as well as South Korean and American soldiers stationed near the border areas, according to the ministry.

"The ministry wishes that the upcoming DMZ Peace Concert can become a chance to draw the world's attention to the peace that is building on the Korean Peninsula," a ministry official said. 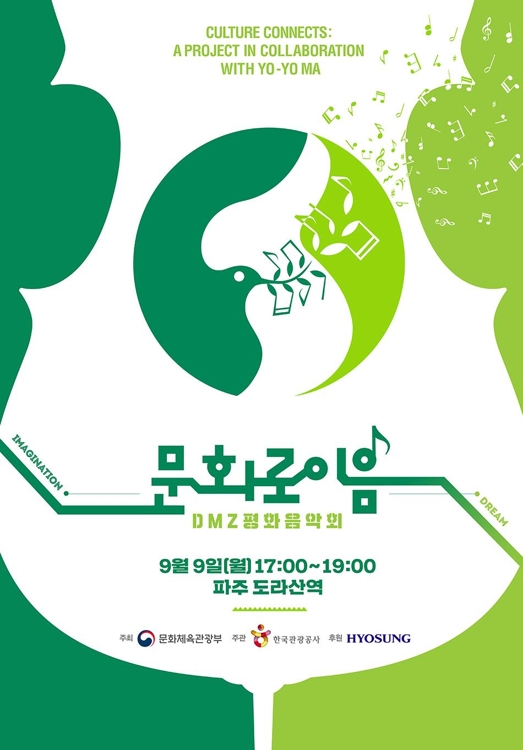 Concert along DMZ to celebrate 1st anniv. of Pyongyang Declaration in Sept.

Concert along DMZ to celebrate 1st anniv. of Pyongyang Declaration in Sept.