It took only four months for the 11 members to rise from obscurity to stardom in the Mnet audition show, "Produce X 101," through which three sensational bands -- I.O.I, Wanna One and IZ*ONE -- were formed and thrived.

On Tuesday, the 11 final winners of the show's latest, fourth season took their first step as the team X1 by releasing the group's first album, "Quantum Leap."

The seven-track EP's main track is "Flash," an EDM number laced with house and future trap beats, which will present the personalities of the 11 members in full view.

Running from May to July, the viewer-voted audition program was subject to feverish attention as well as allegations of vote-fixing after the competition result veered from some public expectations.

Out of the initial 101 candidates, 20 competed in the final voting to pick the final 11 debut members in the last episode of the show aired on July 19.

Several prominent candidates, however, were eliminated from the final lineup, including Kim Min-kyu, despite their solid performances throughout the show's three-month run. Peculiar numerical patterns seen in the final vote count also added to suspicions.

As fans raised vote-rigging allegations, the police launched an investigation into the program's production staff late last month at the request of the show's channel Mnet. 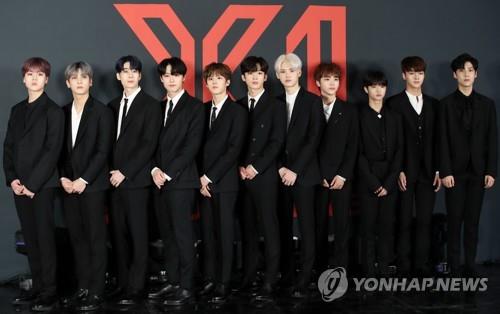 The ongoing police probe, however, did not stop X1 from launching its career, likely to be one of the highest-profile debuts of 2019.

Measuring up to the high expectations, X1 chose the 17,000-person capacity Gocheok Sky Dome in western Seoul as the venue for the premiere of its debut album, mobilizing tens of thousands of fans hours ahead of the showcase set for late Tuesday.

"I wasn't fully aware of the significance of our debut. Having rehearsed the premiere and seen the big stage, I am elated and excited about our future journey," member Cho Seung-youn said in a press conference held before the showcase.

The title of the debut album reflects the team's "determination to make a big leap forward," according to member Kim Woo-seok.

Debuting in the midst of relentless allegations, the members wished that their solid stage performances and musical prowess would brush off any skepticism surrounding them.

"Rather than feeling pressure, I am under the impression that we need to pay back to fans," team leader Han Seung-woo said when asked about the timing of the debut.

"The reason why we worked really hard while preparing for this album was for the fans who love us so that we could wash away such (allegations) through this album," he noted.

The new album contains two more powerful EDM tracks -- "Z1-MA" and "U Got It." But it also comes with piano and strings-based songs, including the fourth track, whose Korean title translates as "It's OK," and the first track, "Stand Up."

The third track, whose title translates as "You Are Prettiest When Smiling," is a comforting song specially meant for fans who selected the 11 members to pursue a K-pop career in the limelight. 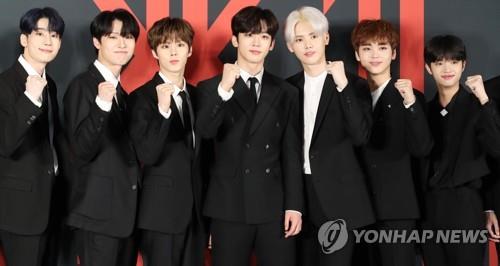