SEOUL, Aug. 29 (Yonhap) -- Yang Hyun-suk, former CEO of YG Entertainment, appeared before police investigators on Thursday to be questioned about the allegations that he engaged in habitual gambling abroad and arranged sex services for foreign investors.

The 49-year-old Yang, clad in a black suit, arrived at the office of the Seoul Metropolitan Police Agency's Intellectual Crime Investigation Team in Seoul, at 9:51 a.m. He had been summoned as a criminal suspect.

Asked by reporters if he admits to his gambling charges, Yang said, "I'll faithfully undergo police investigation." He gave the same answer when asked about charges of foreign exchange law violations. But Yang didn't respond, when reporters asked him to comment on the pimping charges.

Police investigators said they plan to grill Yang about all his criminal charges. 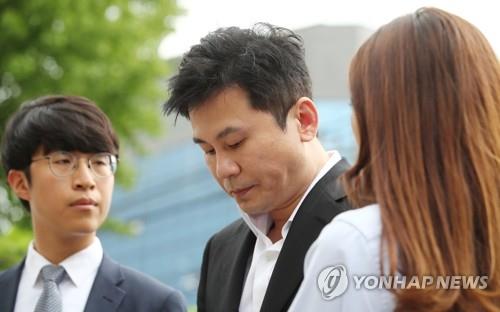 Yang faces allegations that he, together with Seungri, a former member of the K-pop boy band BIGBANG, engaged in habitual gambling abroad and violated the foreign exchange law to secure gambling money.

Seungri, whose real name is Lee Seung-hyun, was also summoned to the special police unit as a suspect Wednesday and underwent questioning for over 12 hours.

Police have earlier raided YG Entertainment and banned the two from leaving the country.

Yang was booked in July on suspicions that he arranged sex services for foreign investors in 2014 while treating them at a posh restaurant. In late June, he was questioned by police as a witness in the suspected pimping case.

Seungri ceased all entertainment activities in March after a nightclub he was associated with came under probe over drug use and sexual abuse.