SEOUL, Aug. 29 (Yonhap) -- South Korea's top court handed down its final verdict Thursday to effectively wrap up its judiciary judgment on a massive corruption scandal that led to the ouster of former President Park Geun-hye.

The Supreme Court struck down the appeals court's ruling that sentenced Park to 25 years in prison in the high-profile corruption scandal.

The top court ordered a lower court to handle Park's bribery charges separately from her other charges, citing a related law that requires such a ruling if the charges affect officials in public posts. She may face a heavier jail term in a new trial.

The top court overturned a lower court's ruling against Choi and also ordered the review of a suspended jail term for Samsung Electronics Vice Chairman Lee Jae-yong for bribery.

Park's case was sent back for a new proceeding, but Thursday's ruling clarified the illegality of the corruption scandal that shook the nation in late 2016. 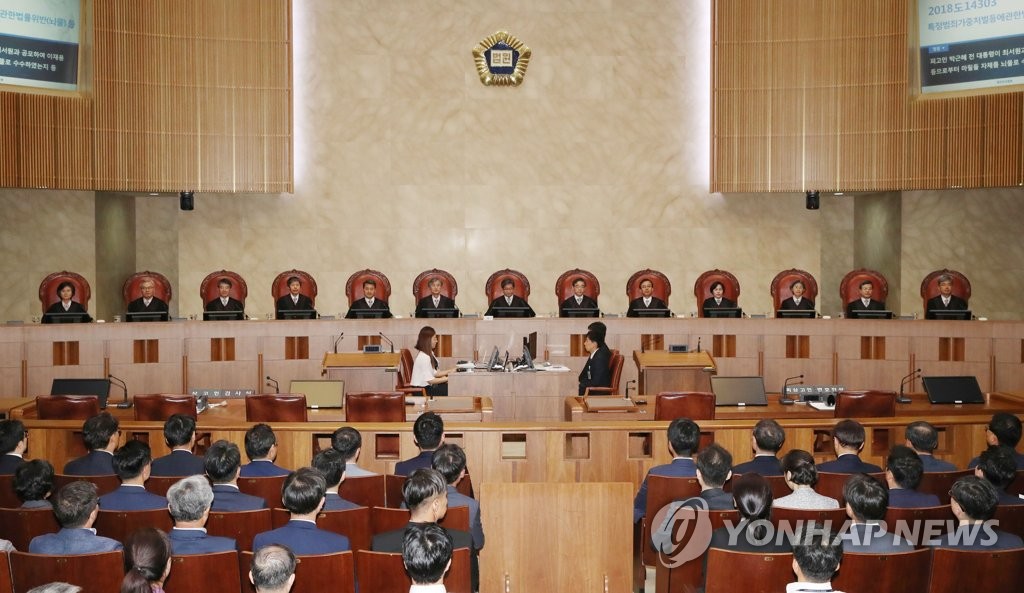 The unprecedented corruption scandal was brought to light in October 2016 as local cable network JTBC unveiled Choi's tablet PC indicating that she had meddled in state affairs using her ties with the ex-president.

Park allowed Choi, who did not hold any government post, to gain access to drafts of presidential speeches and edit them, some of which were classified as confidential.

The ex-president was also accused of colluding with Choi in forcing local conglomerates, including Samsung Group, to donate tens of billions of won to two nonprofit foundations controlled by Choi.

The scandal prompted tens of thousands of protesters to take to the street for candlelight vigils in late 2016 to demand Park's ouster.

The National Assembly passed an impeachment motion against Park by a vote of 234 to 56 in December 2016.

The Constitutional Court upheld Park's impeachment on March 10, 2017, removing her from office and making her the country's first elected leader to be ousted.

Park, a daughter of former authoritarian President Park Chung-hee, took office in early 2013 for a five-year term as the country's first female president.

Ending nearly 10 years of conservative rule, former liberal opposition leader Moon Jae-in, who lost to Park in the 2012 election, won the presidential by-election in May 2017.

The ousted leader was grilled by state prosecutors over the scandals for the first time in March 2017. A month later, she was indicted on multiple charges, including bribery and abuse of power.

In April 2018, a local court sentenced Park to 24 years in its first verdict on 16 charges involving bribery, abuse of power, coercion and leaking state secrets. Her confidante Choi was sentenced to 20 years in a separate trial.

The appeals court judged that Park and Choi received bribes worth some 8.6 billion won (US$7.08 billion). The Supreme Court acknowledged a more extensive scope of bribery by Lee.

The high-profile corruption scandal worked as a catalyst for President Moon to push for a campaign to root out accumulated social ills, which largely point to power abuse cases involving officials from previous conservative governments.

Separately, Park was found guilty of taking off-book money from the state spy agency and interfering in elections.

She was indicted for illegally accepting 3.5 billion won in special activity funds from the National Intelligence Service (NIS) between May 2013 and September 2016.

The ex-leader was also accused of intervening in the then-ruling Saenuri Party's candidate nominations for the 2016 general elections.

Last year, Park was sentenced to six years in prison for the NIS-related case and two years for violating election laws.

In July, an appeals court cut the sentence for Park by one year to five years for misappropriating NIS funds, making her total jail term reach 32 years. 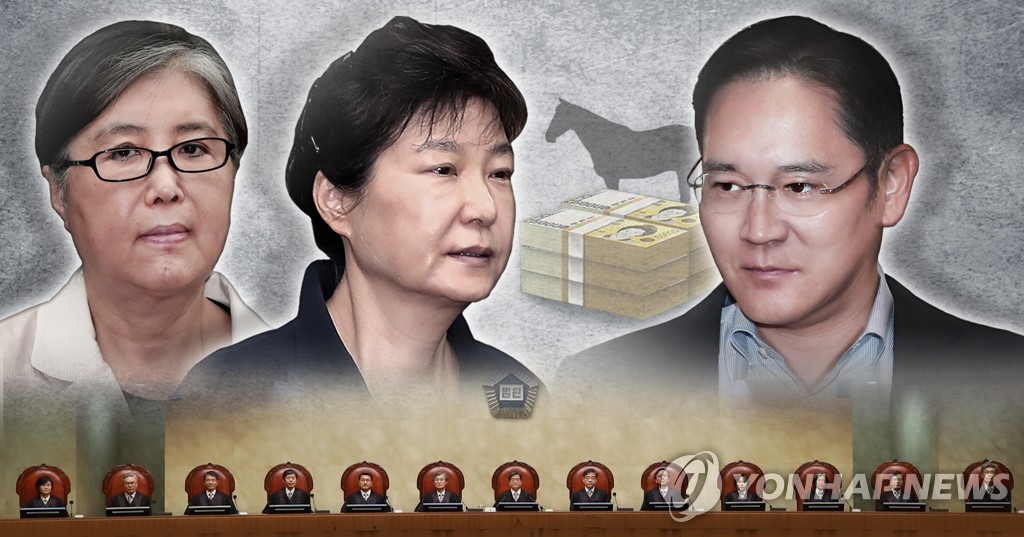