Kim Bo-kyoung, director of Statistics Korea's industry statistics division, said "cars contributed most to increased output" in July and chemical output also rose due to the completion of facility maintenance.

Production in the mining, manufacturing, gas and electricity industries also went up 2.6 percent on-month in July, the highest increase in 32 months, while the output of the service sector increased 1 percent on-month. 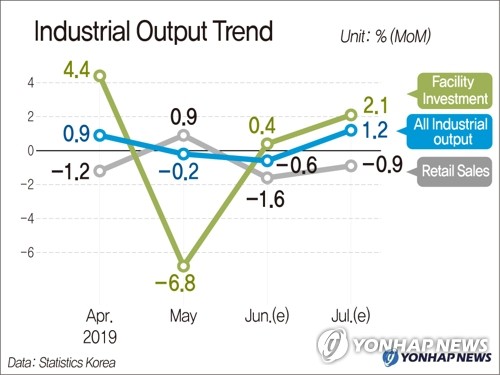 Retail sales, however, retreated 0.9 percent in July from a month earlier due to decreased sales of electronic goods and clothing.

Facility investments rose 2.1 percent last month from June due to increased spending on logistics for foreign auto imports. South Korean companies imported cars worth US$39.9 million in July, up from $33.8 million in June.

Kim said industrial output and facility investments increased in July, but they were not strong enough to reverse the trend of Asia's fourth-largest economy amid slowing exports and fragile domestic demand.

The country's exports declined 13.3 percent in the first 20 days of August from a year earlier to $24.9 billion. South Korea's exports fell 11 percent on-year to $46.1 billion in July, extending their on-year decline for the eighth consecutive month amid a lengthy trade war between the United States and China, and a drop in chip prices.

South Korea's economy contracted 0.3 percent in the first quarter from three months earlier, marking the worst performance since the 2008-09 global financial crisis. In the second quarter of the year, the economy rebounded by growing 1.1 percent on-quarter.

The Bank of Korea slashed its growth outlook to 2.2 percent from 2.5 percent, citing increased uncertainty. The country's finance ministry also trimmed its growth estimate for the year by 0.2 percentage point to a range of between 2.4 percent and 2.5 percent. 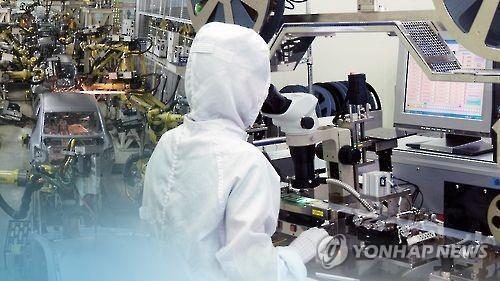