The 49-year-old Yang emerged from the office of the Seoul Metropolitan Police Agency's Intellectual Crime Investigation Team in Seoul at around 8:30 a.m., about 23 hours after he was summoned there Thursday as a criminal suspect. 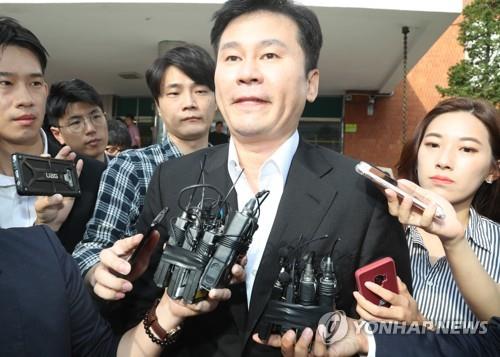 Yang was asked by reporters multiple questions about his charges but simply said he faithfully underwent police grilling. "I answered police questions faithfully and gave a detailed explanation," he told reporters.

Yang faces allegations that he, together with Seungri, a former member of the K-pop boy band BIGBANG, regularly gambled at hotel casinos in Las Vegas and violated the foreign exchange law to secure gambling money. Seungri, whose real name is Lee Seung-hyun, was also summoned to the special police unit as a suspect Wednesday and underwent questioning for over 12 hours. Yang and Seungri reportedly spent 1 billion won (US$823,000) and 2 billion won, respectively, on gambling. In a separate case, Yang was booked in July on suspicions that he arranged sex services for foreign investors in 2014 while treating them at a posh restaurant.

According to police sources, the questioning of Yang was prolonged as he denied most of his charges.