Kim's expanded authority could also serve as a positive factor in denuclearization talks between Pyongyang and Washington as he is expected to have more leeway and more responsibility in future negotiations, they added.

North Korea convened this year's second session of the Supreme People's Assembly (SPA) on Thursday and announced amendments to its constitution mostly aimed at strengthening the legal status and authority of chairman of the State Affairs Commission (SAC) currently held by Kim.

The move came just four months after the rubber-stamp legislature met in April and Kim was reelected as chairman of the SAC and the constitution was revised to make him the official head of state.

"The North's move to revise its constitution again ... can be seen as a demonstration of Chairman Kim Jong-un's intention to take care more actively of state affairs from diplomacy to economy, national defense and education," Jeong Seong-chang, a senior researcher at the Sejong Institute, said.

Under the revised constitution, SAC chairman is authorized to promulgate ordinances, decrees and decisions and to appoint or recall diplomatic envoys to foreign countries.

The amendments also stated that SAC chairman's legal status will be "supreme leader of the party, state and armed forces" which is "elected in accordance with the unanimous will and desire of all the Korean people, both in name and reality."

Kim rules the North with absolute power but constitutionally the president of the Presidium of the SPA has been nominal head of state, with authority to promulgate laws, appoint and recall diplomatic envoys.

Though he was declared as "supreme representative" in the April parliamentary meeting, his enhanced authority has not been fully specified in the constitution.

Experts see the transfer of the power over diplomats to leader Kim as intended to promote the image of a normal state and ease its diplomatic isolation.

"It appears to be in line with (Pyongyang's) efforts to turn itself into a normal state and tackle its diplomatic isolation by beefing up the status and responsibility of its ambassadors," the Institute for National Security Strategy, the state-run think tank associated with Seoul's spy agency, said in a report issued on Friday. 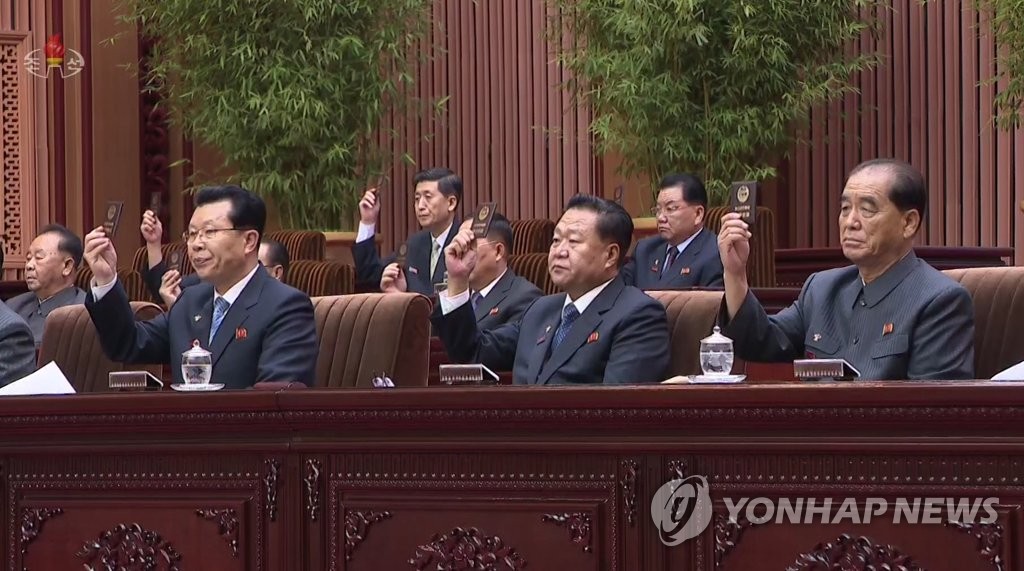 What also drew attention from the latest constitution revisions is that SAC chairman is not elected as deputy to the SPA, which experts see as efforts to differentiate his status from other ordinary deputies.

In March, Kim was not mentioned among the newly elected SPA deputies in nationwide polls, the first time that has happened in North Korean history. The omission stirred speculation that the North might be pushing to change its constitution in a way to consolidate his grip on power.

Some say that all the decision appears aimed at promoting the image of a "normal state."

"It appears that the North is trying to highlight the image of a normal state to the outside by specifying that SAC chairman does not serve as SPA deputy, which I think is aimed at showing that there is a separation between chief executive and legislature," Kim Yong-hyun, a North Korean studies professor at Dongguk University, said.

Thursday's session was closely monitored for any external message by Kim amid expectations that the stalled nuclear talks between the North and the U.S. may resume soon, as joint military exercises between the U.S. and South Korea recently ended.

Pyongyang has sharply denounced the exercises as proof of hostilities and conducted a series of missile launches in protest. Still, U.S. President Donald Trump said Kim sent him a letter saying that he would like to start negotiations as soon as the drills are over.

But the SPA meeting did not send any message toward the U.S. Kim was also apparently absent from Thursday's meeting, unlike in the April session when he delivered a rare policy speech and set the year-end deadline for talks with the U.S.

Experts still say that Kim's strengthened power could be seen as a positive signal on future denuclearization talks in that Kim will have more leeway in negotiations but also take more responsibility if things go awry.

"As leader of a normal state, Kim can show off his strengthened power in his talks with President Trump," Kim of Dongguk University said. "I don't think this is bad for North Korea-U.S. talks. It seems to be positive in that Kim has more leeway to determine his own action," he added.

Hong Min, a research fellow at the Korea Institute for National Unification, said that increased power comes with more responsibility, which he said could have positive impact on future U.S.-North Korea negotiations.

"Thursday's announcement appears to be aimed at sending a message to Trump and the international community to some extent that Kim Jong-un is the official leader of the country," Hong said. "It can be understood that Kim could take an approach to future talks not just with stronger power but also more sense of responsibility."