SEOUL, Aug. 30 (Yonhap) -- The culture ministers of South Korea, Japan and China signed an agreement Friday that lays out a 10-year vision for their trilateral cooperation on the culture front, a rare consensus that came amid escalating diplomatic and trade rows between Seoul and Tokyo.

The "Incheon Declaration" was signed by the South Korean Minister Park Yang-woo and his Japanese and Chinese counterparts, Masahiko Shibayama and Luo Shugang, at the end of the annual cultural ministerial meeting of the three neighboring nations held in the South Korean city of Incheon, west of Seoul.

Since the first session of the ministerial conference held in China in 2007, the trilateral talks have brought together the cultural ministers of the three nations every year to find a common agenda on cultural cooperation and commit them to the implementation.

This year's edition was hosted by South Korea as the country is witnessing one of the worst diplomatic and trade rows with Japan.

Since Japan slapped restrictions on its exports of essential high-tech materials to South Korea last month, ties have soured drastically.

Last week, Seoul decided to terminate the vital intelligence sharing deal, the General Security of Military Information Agreement (GSOMIA), with Japan and the move was followed by Japan's official removal of South Korea from its whitelist of trusted trade partners Wednesday. The latest developments sent the bilateral relationship into a free fall. 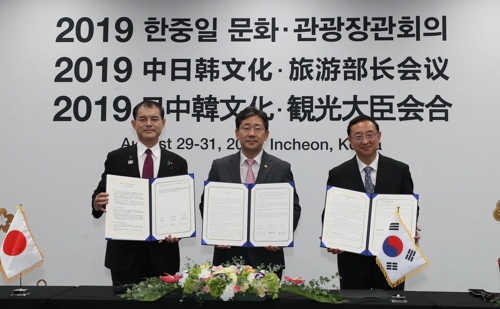 The Incheon Declaration, adopted against such a backdrop, made a point of asserting the importance of cultural cooperation as a way to secure peace in the region.

"The three nations made it clear that the trilateral cooperation involving South Korea, China and Japan for the future should be pursued in a way that (like in the past) promotes cultural diversity on the principle of mutual trust, respect and benefits, and contributes to the building of regional peace in East Asia," the joint agreement showed.

The agreement also committed the three nations to working together for the following decade on such subjects as youth exchanges, climate change, aging societies and the fourth industrial revolution.

Also pledged in the trilateral declaration were joint cultural programs on the sidelines of the 2020 Summer Olympics in Tokyo and the 2022 Winter Olympics in Beijing, as well as closer cooperation in cultural content creation, copyright protection and preservation of heritage assets.

"I hope from the bottom of my heart that the three nations could raise their cultural receptivity by jointly responding through cultural cooperation to many common issues and this in turn could lead to their common prosperity and the peace and the symbiosis of the East Asian community," Park said in his opening speech for the meeting.

The trilateral culture and tourism ministers' meeting kicked off in Incheon for a three-day run.

In a separate meeting of the three nations' tourism ministers -- Park, Luo and Keiichi Ishii from Japan -- held later in the day, the top officials also adopted a joint statement, calling for trilateral cooperation in tourism to help facilitate peace, stability and prosperity.

The statement said that under the agreement signed by the tourism ministers, the three nations will jointly develop tour programs involving Tokyo and Beijing, the upcoming hosts of the Olympics, as well as the South Korean city of Pyeongchang, the destination of the 2018 Winter Olympics, in a joint bid to nurture Northeast Asia as a "hub of peace and sports tourism."

The ministers also agreed to meet again next year in Japan, according to the agreement. 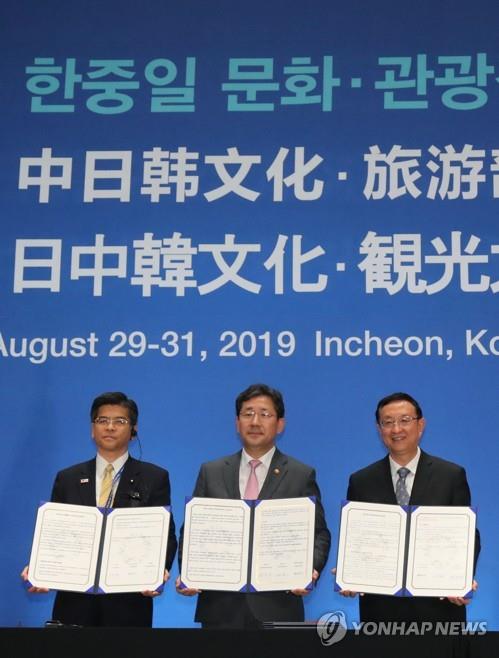