The poll of 1,004 adults conducted from Tuesday to Thursday nationwide found 57 percent opposed Cho's appointment as justice minister, whereas 27 percent expressed support for him. The remaining 16 percent said they don't have an opinion. The poll has a margin of error of plus or minus 3.1 percentage points with a confidence level of 95 percent.

Cho garnered positive evaluations from among the supporters of President Moon Jae-in (56 percent) and the ruling Democratic Party (50 percent) and liberals (49 percent) but was negatively evaluated by the remaining respondents, Gallup Korea explained. 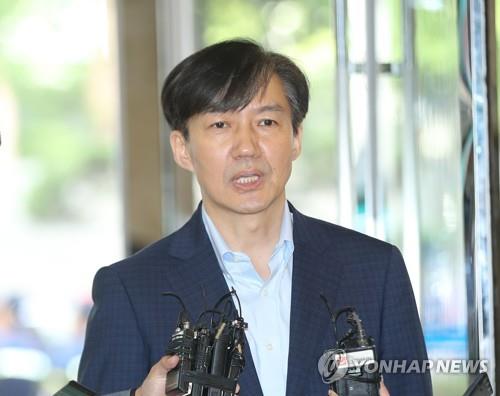 In a Cabinet reshuffle conducted Aug. 9, Moon tapped Cho, who had served as senior presidential secretary for civil affairs after teaching at Seoul National University, to head the Ministry of Justice. But negative public sentiment for Cho has swelled recently amid escalating corruption allegations involving him and his family. Prosecutors have also launched an investigation into the Cho family's dubious investments into a private equity fund and suspected undue college admission and scholarships involving his daughter.

As for the Moon government's reaction to the ongoing trade and diplomatic dispute with Japan, meanwhile, 55 percent gave a positive assessment, compared with 34 percent who voiced the opposite view.

The approval rating for the Democratic Party dropped 3 percentage points from last week to 38 percent, while that of the main opposition Liberty Korea Party remained unchanged at 21 percent, the pollster noted.