BANGKOK, Sept. 1 (Yonhap) -- South Korean President Moon Jae-in flew into Bangkok Sunday at the start of a weeklong trip that will also take him to Myanmar and Laos as part of efforts to deepen Seoul's partnerships with the region.

Moon became the first South Korean president to visit Thailand in seven years. He plans to hold summit talks with Prime Minister Prayuth Chan-ocha on Monday, with bilateral cooperation on innovative growth high on the agenda. 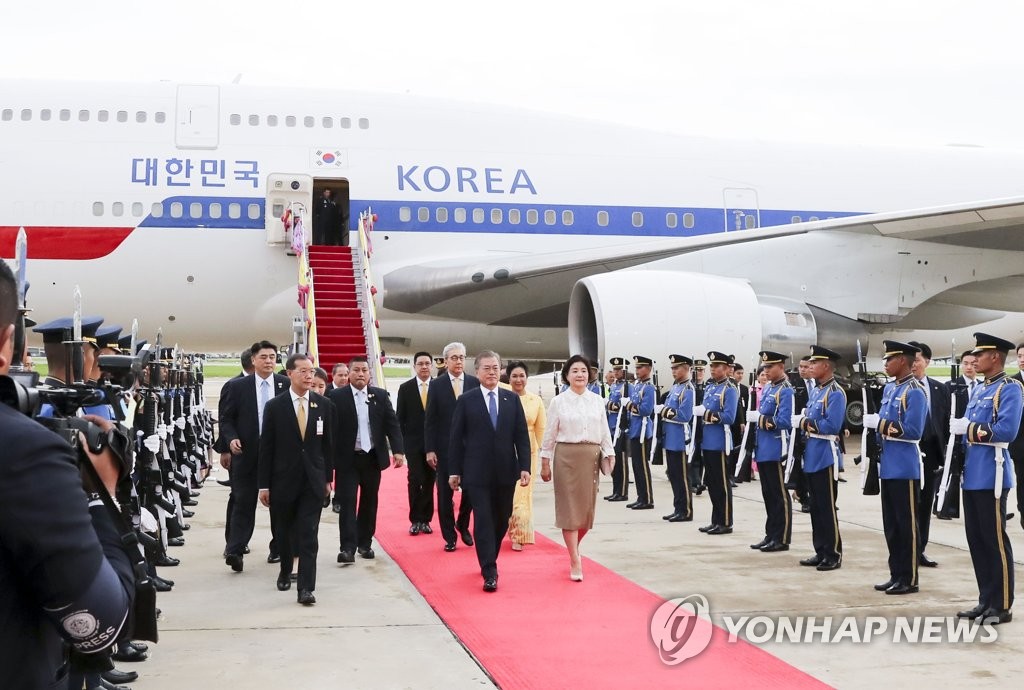 Seoul is now seeking to expand bilateral ties to science-technology and cutting-edge businesses, as Thailand has the second-biggest economy in the region after Indonesia.

The Thai government is pushing for the "Thailand 4.0" project aimed at accelerating the growth of innovative, high-tech industries at home. It's working hard to draw massive global investment in the Eastern Economic Corridor (EEC), the three-province advanced development zone near the capital.

"With the two-way trade volume with our country totaling around US$14 billion, (the two sides) have great potential for the expansion of economic cooperation going forward," Joo Hyung-chul, a Cheong Wa Dae adviser for economic affairs, told reporters.

Moon plans to participate in a Bangkok event Monday, called the "Fourth Industrial Revolution Showcase," and present a vision for bilateral partnerships on digital life, bio-health, smart factory and future vehicles, Joo added. The president will deliver a keynote speech at a related business forum.

On Wednesday, he will head to Myanmar for meetings with its state councilor and Nobel Peace Prize laureate Aung San Suu Kyi and President Win Myint. It would mark the first time for a South Korean leader to travel to the nation since 2012.

Myanmar, rich in natural resources and geographically important, is a latecomer in terms of market opening, which means a lot of opportunities for South Korean companies. More than 200 South Korean firms are doing business there.

During Moon's state visit to the nation, the Myanmar government is expected to launch the "Korea Desk" office to help South Korean businesses resolve administrative difficulties.

Starting on Thursday, the president will make a state visit to Laos, where he will meet with President Bounnhang Vorachith and Prime Minister Thongloun Sisoulith.

Among the main issues to be discussed are partnerships on hydroelectric power, ICT and farm villages. Laos is nicknamed the "battery of Southeast Asia" for its abundant water resources from the Mekong River.

A South Korean president's visit to Laos is unprecedented.

With the six-day journey to the three nations, Moon will also fulfill his promise to visit all 10 member states of the Association of Southeast Asian Nations (ASEAN) during his presidency under his administration's New Southern Policy drive.

The tour of South Korea's key partners in the diplomatic initiative was expected to "serve as a chance to solidify the base to cooperate for the success of the South Korea-ASEAN special summit and the first South Korea-Mekong summit to take place in Busan in November," Park Chul-min, presidential secretary for foreign policy, said.

The special summit will be held from Nov. 25-26 to celebrate the 30th anniversary of South Korea and ASEAN establishing their formal dialogue.

The following day, Moon will host a separate summit there with his counterparts from five ASEAN countries located around the Mekong River -- Cambodia, Myanmar, Laos, Vietnam and Thailand.