SEOUL, Sept. 1 (Yonhap) -- President Moon Jae-in is expected to ask for a parliamentary confirmation hearing report on his justice minister nominee as early as Tuesday, sources said, in a move that suggests he could go ahead with the appointment despite strong opposition objections.

Last month, Moon nominated Cho Kuk, a law professor who served as his senior presidential secretary for civil affairs, to be the new justice minister for his drive to reform the state prosecution.

But the ruling and opposition parties have failed to hold a confirmation hearing amid allegations of ethical lapses involving Cho's family, including suspicions about his daughter's entry into elite schools and his family's dubious investment in a private equity fund.

Though the ruling and the opposition parties had agreed to open a two-day hearing starting on Monday, they have yet to set details, with the opposition side calling for the hearing's further delay.

By law, the National Assembly is supposed to send Moon a report on Cho by Monday after holding a confirmation hearing. If it fails to do so, the president is required to make another request for a report within a specific period of time.

In South Korea, nominees for ministerial positions are subject to non-binding confirmation hearings by the National Assembly. As the parliament cannot reject a minister's nomination, its refusal to adopt a confirmation hearing report is the most it can do to express objections.

"So far, Moon made a second request for a confirmation hearing report one day after its first deadline," a Cheong Wa Dae official said. "Considering the practice, President Moon is expected to make a second request on Tuesday."

Though the presidential office has not taken any official stance on an opposition party's proposal to hold the hearing on Thursday and Friday, another official voiced his objection to the further delay, calling on the parties to fulfill their earlier pledge.

Upon arriving at his temporary office in Seoul, Cho told reporters on Sunday that he will "wait to the end" for a chance to publicly explain the suspicions. 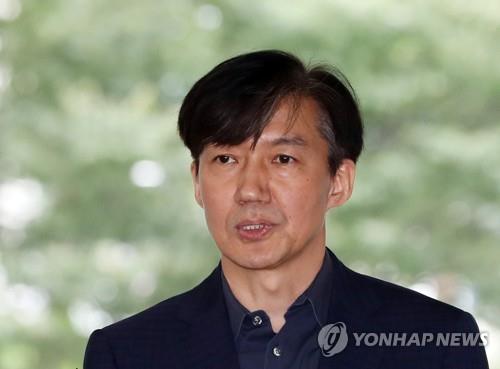